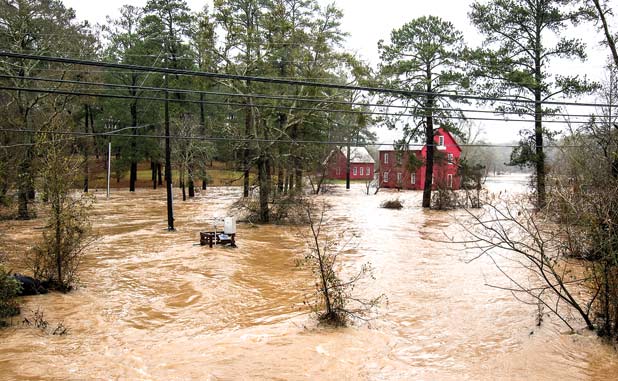 To say it was a wet Christmas would be an understatement. Several inches of rain that began mid-week caused significant flooding, but no injuries, by the time the Christmas weekend was over and led to the closure of portions of three roads in south Fayette County.

Approximately seven inches of rain fell in Fayette County between Dec. 21-27, according to the National Weather Service. As much as an additional inch of rain is expected through Thursday morning.

Fayette County Fire and Emergency Services (FES) Deputy Fire Chief Tom Bartlett said approximately 60 homes in the Chanticleer subdivision were affected after a portion of Canterbury Lane washed out. Water lines in the subdivision were also down due to the weather.

Bartlett said there were no injuries associated with the wash-out.

Repairs to the roadway was assessed over the weekend due to flood water not expected to crest until later in the day on Christmas, Nelms said. Repair work on Canterbury Lane is a priority, said Nelms.

Below, Canterbury Lane as it looked Dec. 24. Photo/Fayette County Fire and Emergency Services. 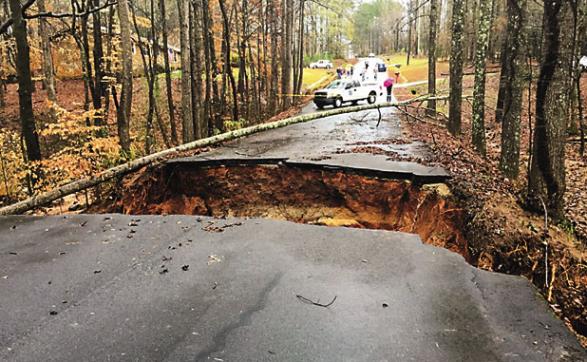 Nelms also commended the Fayette County Public Works Department and private contractor Brent Scarbrough for the significant work on the water lines performed as a result of the wash-out.

Nelms said a portion of McBride Road became impassable on Christmas Eve, requiring a temporary barricade until needed work can be performed.

Local rivers and creeks saw plenty of water over the Christmas holiday, with rains producing water that led to flood stage being surpassed.

The Flint River near Woolsey on Dec. 25 was at 50.1 feet and falling at 9 p.m., according to NWS. Flood stage for that portion of the river is 48 feet.

Whitewater Creek near Starr’s Mill saw waters at 12.2 feet and falling on Christmas with minor flooding occurring. Flood stage for the area is 10 feet.

Line Creek near Senoia also had flood waters exceeding flood levels. The creek saw minor flooding, with waters at 10.4 feet and falling at 10 p.m. on Dec. 25.Flood stage is 10 feet.

A drive past Lake Peachtree on Monday revealed a scene not encountered for nearly a year. Though the lake is largely drained while work nears completion, heavy rains did their job of filling the lake, at least temporarily.

Below, it has been nearly a year since Lake Peachtree was full of water. The view of the lake on Dec. 29 showed only a temporary full-pool due to heavy rains that began Christmas week and are expected to continue through Dec. 30. Photo/Ben Nelms. 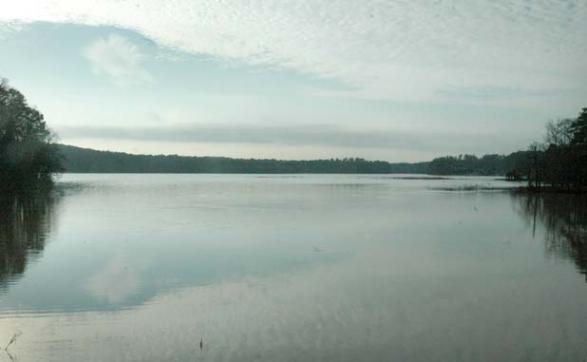