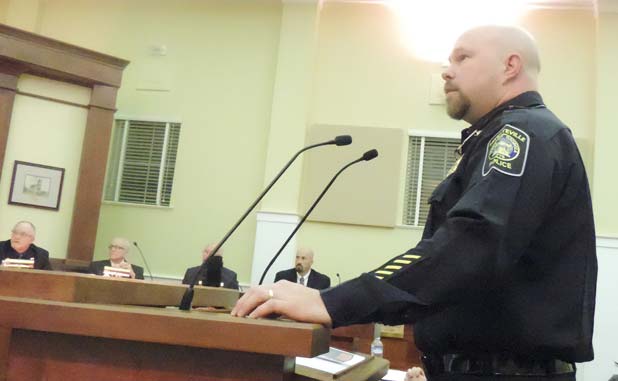 The Fayetteville Police Department is going the way of a number of law enforcement agencies and has purchased body cameras to be worn by officers. The department is now in the initial testing phase of the Body-Worn Camera (BWC) system.

Department spokesman Mike Whitlow said the department purchased 35 Safety Vision “Prima Facie” cameras at $299 each in late November and is conducting a beta-test with one of their patrol shifts to determine where and how the cameras will be worn by all shifts to obtain maximum benefit.

Whitlow said the initial idea is to have officers activate the cameras during serious crimes, traffic accidents and encounters with the public.

Whitlow said the department will continue to review all aspects of the camera system over the coming weeks and months to determine if adjustments or changes are needed.

“Thus far, there have been very few problems with the cameras and the department expects every patrol officer in the department to be using the cameras soon. There are also plans to eventually equip every sworn officer, uniform and non-uniform, with a BWC,” said Whitlow.

The greatest expense involving body cameras is in the cost of data storage. The department will initially use a cloud system for data storage, Whitlow said.

An aspect of the expense deals with the amount of data stored, which is related to the types of data recorded and the length of time that data is stored. Whitlow said a policy is being developed that will address both those matters, along with all applicable state regulations that deal with the retention of evidence.

Whitlow said both the department and Information Technology Specialist Mike Yearty are also identifying and resolving any issues that may arise such as storage and functionality.

In terms of functionality, Whitlow said, “Captain Chad Myers, whose shift is testing the cameras, has been pleased so far and said the video and audio quality is excellent and we have already seen instances where people’s attitudes toward us have changed once they see our cameras are activated.”

Commenting on the effectiveness of the body cameras, Coweta County Sheriff’s Office of Professional Standards Major Tony Grant in early 2015 said the cameras are providing a benefit to both citizens and deputies.

“There is an advantage for citizens and officers. The camera records the incident as it happened. It’s an extra step of protection for citizens and it helps the officer and the whole judicial system because it speaks the truth,” Grant said. “When the cameras first rolled out some officers were skeptical… of ‘big brother.’ But the camera sees and hears everything. Now after six months of use, the officers love them.”