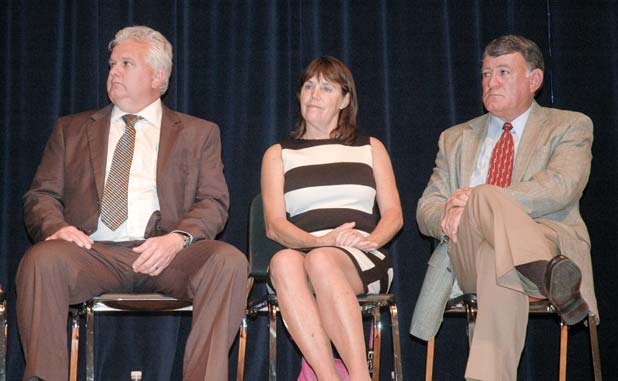 A forum for candidates for office in Peachtree City and Tyrone was held Oct. 12 at Sandy Creek High School in Tyrone. Among the questions posed to the candidates were those asking their perspective on zoning issues and annexations.

Candidates from Peachtree City included Post 1 candidates Phil Prebor and Shayne Robinson. Though he has no opponent in the November election, Post 2 Councilman Mike King was on stage and responded to questions.

The responses of the Tyrone candidates for office will be featured in the Oct. 17 edition of The Citizen.

A member of the Peachtree City Planning Commission, Prebor in his opening comments said that, as a small business owner, getting through the recession required making tough decisions. Those decision are the same kind that need to be made at City Hall, he said.

Prebor said he would use the idea of “we” rather than “I” to phrase his intention as a member of the City Council. The “we” represents those in, and outside, Peachtree City, he said.

What is needed to make Peachtree City a better place “is to take advantage of teamwork to run the city like a business with no room for resentment and grudges,” he said.

Noting that Peachtree City in recent times has been reactive rather than proactive, Prebor said problems are actually opportunities that can be dealt with effectively. Among those problems are traffic, paving, stormwater and crime. Prebor said tough questions must be asked and accurate answers demanded.

Robinson began her opening remarks citing the various city organizations and commissions with which she is and has been affiliated. She said running for a council seat is the natural progression of the work she has done, work that spans 15 years.

Robinson laid out a goal for the city that would essentially protect the city’s “brand.”

“We do that by enforcing the policies and ordinances that we already have on the books,” she said.

Robinson put forward the idea of a five-year plan for the city.

“A five-year plan is so much more constructive moving forward,” Robinson said in comparison to a Facebook plan. “We having aging infrastructure the city needs to address. We need to think outside the box. There are a lot of creative ideas, grants that are available out there.”

Robinson said she would also like to “reach hands across the border” to the county and municipalities to address common issues.

A long-time resident of Peachtree City, King began his opening remarks saying he moved to the city with the idea of staying a few years. Those plans changed and he decided to stay. Now years later, King said he still holds to his belief in “giving back.”

“Our three grown kids have benefitted from being in Peachtree City and we need to give back,” King said. “We have some problems that are being addressed. If you were in Peachtree City two or three years ago you would have noticed some bickering and letters to the editor that went on back and forth. That was disconcerting and doesn’t do anybody any good.”

King said much positive work has gone on behind the scenes in the past two years without the vitriol of the past.

“And that is an accomplishment in itself,” he said.

King said voters need to take a look at candidates who will put forth the effort to get something done as opposed to doing things to get their name in the paper.

King in his response said the first thing that should be done is to understand the situation you are in. By way of example, he cited the rezoning request for a .83-acre tract that will come before the council on Oct. 15. The triangular property at the corner of Ga. Highway 54 and Robinson Road is zoned residential for one-acre lots. The request is to have the property zoned for office use, as is much of the surrounding property.

“The owner (by ordinance) must have one acre. The acre’s not there. So now the property owner can’t use it for what the zoning is requested for. So now we have to go into a rezoning process,” King said. “And the way you get through that, as I did today, is you go out and talk to the folks across the street (and ask them) what they want there. They were in consensus. They said it would be a lot better to have a doctor’s office than a convenience store with 24-hour lights. It’s something you have to work with for the best thing for the area and for the neighborhood. And if that fits in with the Land Use Plan, it meets the criteria.”

Aside from some who want no change, King said the property owner has a right to enjoy the property to the best of its ability, adding that it must be accomplished within the context of the law.

Next up was Robinson, who reiterated her stand to protect the Peachtree City “brand.”

Robinson said with such requests she would do her homework by speaking with all pertinent staff, then go to visit the property in question.

“By doing that you have the ordinances that are already on our books,” she said. “I’m a great one for using the resources we have available. Peachtree City has a great staff. You’ve got a great planning and zoning department. I would use the resources we have first before I go out and look at the land.”

Robinson said her decision would come after obtaining full information on the request being made.

Prebor in addressing the question said variances have been a hot topic in Peachtree City lately.

Citing an aspect of the Hwy. 54/Robinson Road hearing on Oct. 15, Prebor said a portion of the issue deals with trees.

“The lot of what Mike is speaking of is zoned (one-acre residential). We should do some research and find out how this guy bought a piece of property zoned residential and he can’t put a house on it. Really? He should have thought about that before he bought it,” Prebor said. “Or was it from imminent domain when Robinson Road was changed. At that point we’ve brought it on and, yes, we do owe an obligation to that property owner. Otherwise, he needed to do his due diligence when he brought the property, to know the setbacks, to know what can be built or not built.”

Prebor then turned his remarks toward city planning staff.

“City staff, sometimes I think they can do a better job (with) the Land Use Plan. Why do you have a (residential zoning) in an area that can’t be built?” Prebor asked. “The city staff needs to step up and do their job. And that kind of goes to what I said about asking tough questions and demand accurate answers before we make any decision.”

Another question put to the candidates asked their opinion on the role of elected officials in dealing with annexation issues.

Prebor said as with any municipality, there are opportunities where annexations are good and there are situations where they are not good.

Prebor noted that, prior to annexation, there is a need to know the fixed costs, the variable costs, the cost of public safety, the cost to install pump stations and the amount of revenue from sewer service.

“In Peachtree City, we’re still catching up from years ago of reactive, poor planning. And until we get everything planned, know how much it’s going to cost and we know what to expect we don’t need to take on anything else,” said Prebor in reference to a past annexation and the issues he saw with that move.

Robinson in her response said Peachtree City this year has opened the door to hear requests for annexation.

“We don’t have enough staff, bottom line, to handle the annexation requests that are coming in,” she said. “So we’re dealing with them on a case by case basis, as I understand. That’s how annexation should be, on a case by case basis. Is it good for our citizens? Peachtree City citizens, we come first. Everyone says annexation is to protect our borders. What are we protecting them from? If we annex too much property, are we stressing and straining our resources?”

Robinson said any annexation should be viewed from a case by case perspective to ensure that it is good for the city.

“If it’s not going to take away any tax dollars we already pay, if it’s going to be beneficial to us and having WASA on our doorstep is also great for Peachtree City,” she said. “So annexation, yes and no, and on a case by case basis.”

King in his remarks began by referencing the drive into Peachtree City on Ga. Highway 74 from Interstate 85. Whether entering the city from the north, south or west, there is no doubt where the city limits begins.

“On the east side there’s a little bit of a difference. If you look on the north side (of Hwy. 54) we have a lot of that in the city limits,” King said of the Lexington area. “But across the street the city limits stops at the graveyard going toward Fayetteville. So we’re looking to annex some areas. And over there is part of it. But we need the input from those businesses that are there so that they want to come in. But just as important to having them ready to come in is to make sure (the Fayette County Commission) understands that it’s in the best interest of Fayette County to bring those areas into Peachtree City.

“Annexation is a two-edged sword. Since I’ve been on council we’ve annexed one small parcel on Hwy. 54. There’s areas to be looked at. But it’s going to take dialogue like Mr. Prebor and Ms. Robinson have said, between our county and Peachtree City. It is a case by case basis and it’s to be done for the common good of all, not just for Peachtree City or for the good of Fayette County.”

Of the approximately 80 people in the audience, the overwhelming majority were from Tyrone.