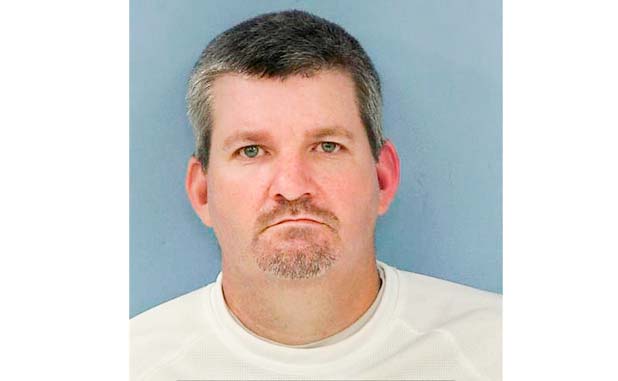 The driver for retired Gen. William Livsey has been charged with felony influencing a witness after Fayetteville Police investigators said they believe Timothy Bedgood attempted to influence the Chinese take-out delivery driver who reported that he had been robbed at Livsey’s residence on Aug. 15.

Fayetteville Police Department spokesman Mike Whitlow said Timothy Allen Bedgood, 44, of Sharpsburg, was arrested on Aug. 28 on one count of felony influencing a witness in relation to the events surrounding the arrest of General William Livsey on August 15.

Whitlow said Fayetteville Police maintain Bedgood spoke with the victim, a delivery driver, after the driver had spoken to police, in an attempt to have him change his initial story. Bedgood also made statements to media in the following days which contradict the facts Fayetteville Detectives have gathered, Whitlow said.

“Timothy Bedgood did commit the offense of influencing a witness when he did approach and offer favor and intimidation to Ryan Irvin, a witness/victim, in order to influence future testimony by Irvin regarding an ongoing criminal proceeding,” the warrant said.

According to previous reports by The Citizen, police handcuffed and jailed the 84-year-old retiree after a delivery of takeout food from a Chinese restaurant resulted in a scuffle over the $80.60 bill inside the general’s Carriage Chase home and a subsequent confrontation with officers.

Ryan Irvin, 26, who has worked for Royal Chef Restaurant for more than six years, said he asked police to drop charges but that they refused and told him it was out of their hands.

Tim Bedgood of Sharpsburg, a part-time employee of Livsey, told The Citizen that he was present at the altercation. According to Bedgood, one of two female “guests” of Livsey took the sack of Chinese food from Irvin and began distributing it on the kitchen counter while Irvin attempted to get payment from Livsey.

Bedgood said the general had left out $120 in cash but that the money was nowhere to be found when he sought to pay the driver.

He then attempted to pay with a debit card, both Bedgood and Irvin told The Citizen, but the card was declined electronically. When Livsey offered to pay with a check, Irvin said he told him the restaurant did not take checks.

At that point the stories diverge. Irvin said the general was embarrassed and angry. When Irvin attempted to take the food back, Livsey allegedly grabbed his beard and neck and pushed him against a refrigerator, saying, “I’m gonna whip your a—,” Irvin told The Citizen in a recorded statement.

Bedgood’s version is that Irvin attempted to retrieve the food sack from one of the women — identified as “Tanji” — resulting in a small tug of war. That was when Livsey intervened, grabbing Irvin and saying, “Talk to me! Talk to me!” Bedgood told The Citizen in a recorded statement.

The police report narrative pertaining to the time frame after Irvin reported the incident stated that Irvin had requested a call from an officer, though the call back number he provided was incorrect. An officer arrived at the restaurant and found Bedgood talking with Irvin, the narrative said.

“I separated Irvin from Tim (Bedgood) and spoke with him. Irvin said that he changed his mind, he did not want to press charges,” the incident report narrative said.

Whitlow in the Aug. 31 press release said the police department would also like to clarify some information which had been reported – the original number of officers on scene was only three, two additional arrived on scene when fire and EMS arrived, due to the number of concerned neighbors and onlookers.

There were six fire and EMS personnel on scene, which is normal protocol.

There were also reports that General Livsey received extensive injuries which in fact were only minor lacerations on his wrist that were incurred while he was being handcuffed. These injuries were treated at the scene by EMS personnel. There was no additional force necessitated or used during the incident, Whitlow said.