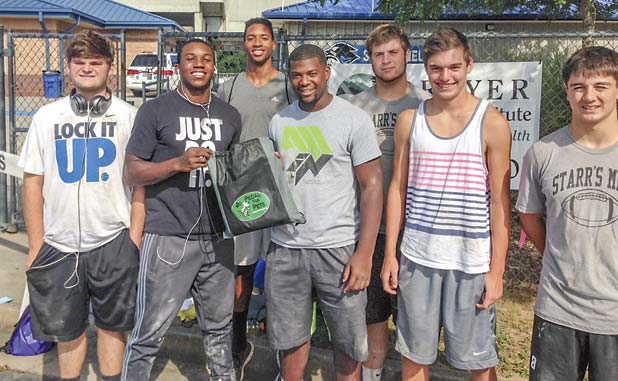 Seven Starr’s Mill High School students traveled to Glenwood to on Aug. 22 to do their part to help build kennels for the nonprofit SoCo Rescue service.

“Once the boys stepped through the door it was a sprint of hauling cement blocks, mixing cement, measuring, leveling, spreading the cement goop all over the cinder blocks, gathering the fencing materials and petting the dogs around us,” said Maguire. “It was hot, it was a miserable hot and there was no relief in this rural part of Georgia.”

“Not one complaint, not one person stood around, not one regret. It was amazing,” Maguire said. “As we loaded up, covered in layers of sweat, dirt, sand, cement and doggie grime, they all started talking about the different dogs they had met.”

Maguire said their efforts helped provide a shelter for 50 dogs whose lives are now being spared.

For more information on the many projects undertaken by Pedal for Pets visit pedalforpets.org