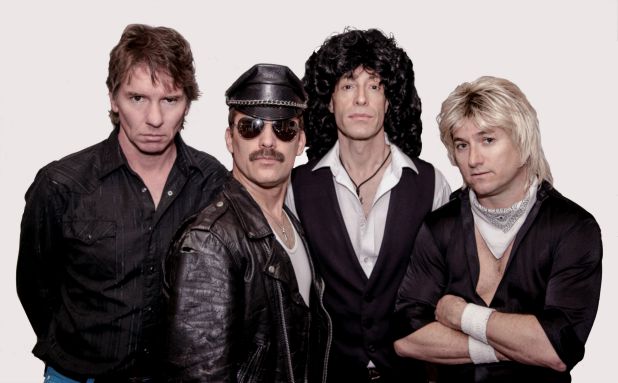 There is little doubt among the pure rock community that the legendary band Queen and lead performer Freddie Mercury earn high ranks as one of the most powerful and iconic groups in rock history. Upon his death in 1991, a huge void was left in the rock concert world, which to this day has not yet been matched.

Queen Nation, a tribute to Queen, was formed in 2004. Queen Nation consists o: Gregory Finsley on vocals & keyboards as Freddie Mercury, Mike McManus on guitar as Brian May, Pete Burke on drums as Roger Taylor, and Parker Combs on bass as John Deacon. The mission of the show is to carry on the musical torch and pay homage to the golden age of vintage Queen concerts.

In 2013 Queen Nation was recognized as The World’s Greatest Queen Tribute by Mark Cuban, Ryan Seacrest and their cutting edge network AXS TV. Queen Nation was given a 1hr LIVE national broadcast from the Roxy in Hollywood, to 40 million viewers. A coinciding compilation album was released by AXS TV featuring two tracks recorded by Queen Nation. Most recently, Queen Nation was selected by The Los Angeles Angels of Anaheim baseball team to perform on the infield of Angel Stadium as part of their Flashback Weekend.

Queen Nation’s live 100-minute production of Queen’s greatest hits preserves the image, sound, and stage persona of vintage Queen. Audiences are amazed at the accuracy of Queen Nation’s live retrospective journey through such Queen songs as “We Will Rock You,” “We Are The Champions,” “Bohemian Rhapsody,” “Crazy Little Thing Called Love,” “You’re My Best Friend,” “Another One Bites The Dust,” “Under Pressure” and many more. They have performed in front of thousands of people at casinos, fairs, sports arenas and private affairs.

Tickets are available and may be purchased online at amphitheater.org or by calling 770-631-0630. Gates will open at 7 pm and the opening band Aces & 8’s will go on at 8 pm. Queen Nation will take the stage at 9 pm.