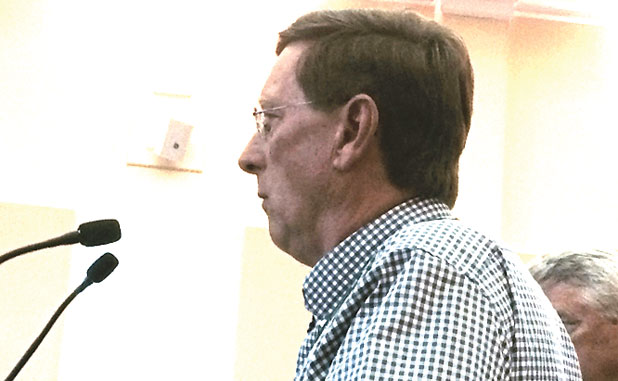 By a 3-2 vote, the Fayetteville City Council gave the go-ahead for the first phase of development in the southern half of Pinewood Forrest that is currently located in the city.

That gives a green light to developing 130 acres for 70 single-family homes, a boutique hotel and part of the retail component planned for the site.

Earlier in the meeting, the council had tabled an annexation request for the northern 98 acres of the site until the review comes back from the Atlanta Regional Commission because the development is considered a Development of Regional Impact.

Councilman Jim Williams, Paul Oddo and Scott Stacy voted for the proposal, which eliminated the requirement for sprinklers in single family homes less than 20 feet apart. When the motion was  approved, Fire Chief Alan Jones left the meeting room and went to the front part of City Hall, where City Manager Ray Gibson talked to him.

After the meeting, Jones spoke about eliminating the sprinkler requirement.

“It all came about in just a flash, and we hope to offer a presentation at the next City Council meeting that offers all the information about the requirement,” he said.

Jones added the requirement is still in the PCD zoning category, so giving Pinewood Forrest an exception could lead to future requests for a similar variance.

“I just want to make sure everyone has all the information they need to make such a decision,” Jones said.

Earlier in the meeting, Pace tried to deal with some of the issues that people had with the project, such as the allegation of low income housing.

The development had also come under fire for possibly creating a stormwater problem, but retired biologist Dennis Chase, who had opposed the project, offered his support Thursday. Chase said he had talked to the EPA about the project, and the group is already studying the plans for stormwater issues.

Some of the opposition has come from residents on the southern boundary of the development on Hood Road. Donald Fowler warned of dire consequences.

“The nearest city resident is one mile away. The added traffic impact will be huge,” he said.

In the end, the majority of the council bought into Pace’s vision for the area, which he said will be a world-class development.