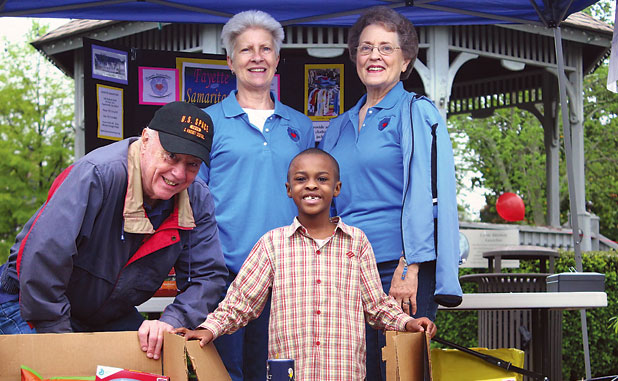 Eight-year-old Fayetteville resident Andrew Fleming is never at a loss for helping people in need. Now in his third year of making a difference, “Andrew’s Fun and Helpful Community’s Food Drive” was held April 18 at the Fayette Samaritans campus in north Fayette County.

“Andrew saw his wish to help hungry children come true on Saturday, when people donated hundreds of items to Fayette Samaritans,” said LaKeisha Fleming, Andrew’s mother. “Despite the rain, Andrew’s Fun and Helpful Community’s Food Drive was a huge success. And after weeks of preparation, Andrew was happy with the outcome.”

“I think it went good and we had lots of people that brought food and I’m very glad that happened,” said Andrew.

One of the people attending the event was Fayetteville Councilman Ed Johnson.

“I think it makes young people as well as the adults realize that all of us need to work together for those who are underprivileged or who are less fortunate than us,” Johnson said.

“The Fayette Samaritans have been around for such a long time, and there were times when their shelves were actually bare. And so not only at Christmas time or the holidays, we should do this more often. We should do this throughout the whole year, just to help them,” said Waits.

Fayette Samaritans’ President Linda Ladd said the organization was grateful for the benefits of the food drive that extend beyond resources.

“It gives exposure to the issue of hunger, and people in need within the community,” said Ladd. “And I think it also shows people that the community wants to provide for the residents of their area.”

LaKeisha said Andrew’s event was held as a part of Global Youth Service Day. Several youth volunteers took part in the event, and were able to learn valuable lessons.

“It’s important to help other people, because first of all that’s what God wants you to do, and (you) just know that other people are in need of things,” said 12-year-old volunteer, Sarah Beresford.

LaKeisha said the food drive was truly a community effort, with businesses providing food, coupons for giveaways, and volunteering their services to make this event a success.

“A lot of organizations did help me with the event and I would like to say thank you very much,” Andrew said, then providing a hint of things to come. ”My future plans are I think I just really want to stick to fighting hunger. That just really seems like it’s what I was meant to do.”

Andrew’s first effort came two years ago when, at age 6, he spearheaded the fundraiser for the former Fayette Youth Protection Homes (now known as Bloom).

That effort was followed in 2014 with the “Stamp Out Hunger” food drive held at the Fayette Samaritans campus on Hickory Road.

“Andrew says no child should go to bed hungry,” said LaKeisha. “And thanks to a Sodexo Foundation Youth Grant, he’s going to do his best to see that it doesn’t happen. He was awarded the grant through YSA (Youth Service America). The grant will support Andrew in leading a community service project that addresses the issue of childhood hunger.”

3 out-of-county students charged after FCHS students let them into school...