The Citizen
Tuesday, September 8, 2020
Sign in
Welcome! Log into your account
Forgot your password? Get help
Create an account
Create an account
Welcome! Register for an account
A password will be e-mailed to you.
Password recovery
Recover your password
A password will be e-mailed to you.
Home Community PTC ceremonies focus on U.S.’s ‘lost generations’
Facebook
Twitter
Pinterest
Linkedin
A hearty crowd came together at the veterans monument in Peachtree City Monday to honor the thousands upon thousands of military servicemen who gave their lives to protect America.
Keynote speaker retired Army Brig. Gen. Steven R. Hawkins pointed out that the United States funds the upkeep of a number of battle monuments and memorial cemeteries across the world to honor those who died serving our country.
Right, above, representatives of the county’s veterans organizations laid a commemorative wreath in honor of U.S. military members who gave their life for their country. Peachtree City’s Memorial Day event took place at its Veterans Monument at City Hall Plaza. Photo/John Munford.
“Those 218,000 of our comrades, both men and women, are never going to come home,” Hawkins said. “94,000 of those, or about three times the size of Peachtree City, were missing in action and have never been found. We still look for them today.”
Hawkins noted that there is “no greater gift” than could be given to the United States than to give one’s life fighting for its freedom.
“As I used to walk amongst the crosses and the stars of David in these cemeteries, these valiant warriors did love, and they were loved, and we should never forget that losing a loved one is truly a family affair,” Hawkins said. “One can only imagine the pain and suffering of those left behind. The mothers, fathers, uncles aunts, wives, girlfriends, boyfriends, children also sacrificed this greatest gift.”
Hawkins also shared the story of a fallen comrade, Lt. Col. Chuck Buehring, who died Oct. 26, 2003 during a rocket attack in Baghdad at the Al-Rasheed hotel.
“He was a fine young man,” Hawkins said, “He was married with two boys, a Boy Scout leader, and also a soccer coach.”
Retired Army Brig. Gen. Steven R. Hawkins told the crowd at Peachtree City’s Memorial Day event that there is “no greater gift” than to lay down one’s life for his country. Photo/John Munford. 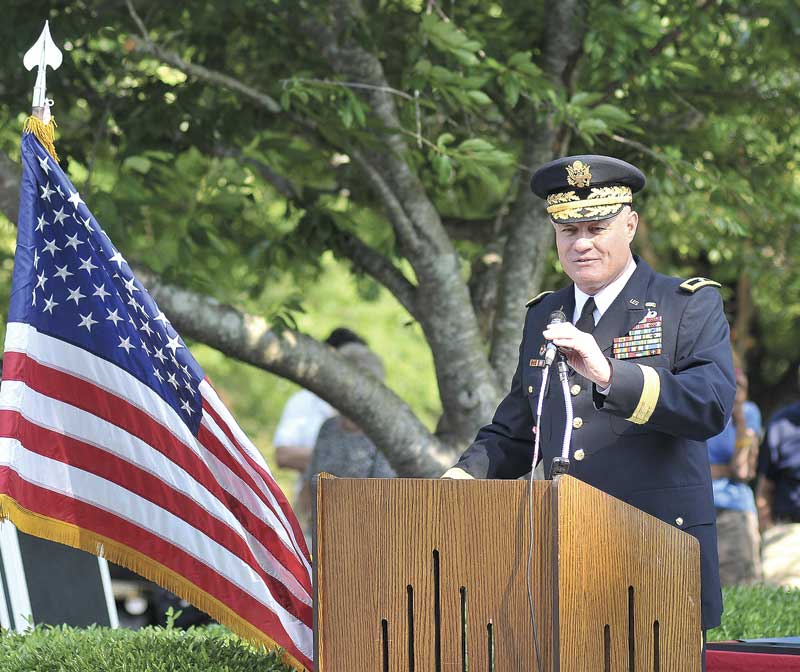 Hawkins recalled kneeling beside Buehring as staff attended to the wounded. Hawkins held onto Buehring’s leg “and prayed for his soul, and prayed that he would never be forgotten as a soldier who gave his last final measure of devotion for his country.”
“You can tell the soul of a country by the way they honor their war dead,” Hawkins said, pointing to two patriotic essays read by local students moments before. “… Everywhere in our country, in every corner of this great land there are Americans who are willing to stand up and be counted.
“For those who tasted the stain of battle, you know they don’t fight for all the great ideas,” Hawkins said. “You fight to stay alive and fight to keep your buddy alive. But you usually come to face the motivation to serve this country and what it stands for.”
He closed with a quote from WWII General Mark Clark, commander of the fifth Army, that is etched on the walls in Normandy where thousands of Americans and other Allied forces died while storming the shores to attack German and Axis forces.
“This is what he said: ‘If ever proof were needed that we fought for a cause, and not for conquest, we found in these cemeteries. Here our only conquest, all we asked was enough soil in which to bury our gallant dead.’”
David Niebes, a Peachtree City resident and commander of the county’s oldest veterans organization, Post 105 in Fayetteville, reminded the crowd that today is not a day to honor living or active veterans.
“Today, we honor men and women in uniform who are not here. They’re not with us any more,” Niebes said. “They are resting in places like Arlington National Cemetery, here in Georgia at the Marietta National Cemetery, resting in the city cemetery in Fayetteville. They’re resting in places like the Omaha Beach cemetery, at the bottom of Pearl Harbor and in places that are known only to God.
“Some of them, their life was snuffed out instantly. Some of them languished for a long time in hospitals and POW camps. Some of them suffered for years and are still suffering the effects of things like Agent Orange and PTSD. So today, enjoy the holiday. When you fire up your grill, take a dip in your backyard swimming pool or play that afternoon round of golf, each of you, in your own way, pause and say a short prayer of thanks and remember the sacrifices of our men and women in uniform who died in service to our country.”