Since 9-11 we have asked a great deal of our all-volunteer military. Over a decade of deployments to war zones make our present force the most combat-experienced ever, but sending individual troops on three, four, five or more combat tours levies immeasurable cost to them and their family.

It should be no surprise that we have a spike in the number of veterans with post traumatic stress disorder (PTSD) issues and traumatic brain injury (TMI), wounds that are not outwardly visible, and sometimes the care they receive just isn’t enough.

Our military gives them a token pension and squeezes them out like broken widgets. The Veterans Administration is trying, but their backlog in qualifying veterans for treatment benefits is measured in years.

Right here in Fayette County, a determined lady named Piper Hill is doing something about it, one veteran at a time. While she was an Army officer dealing with her own traumatic medical issues, her dog, Valentine, was her constant companion and sometimes her most powerful medication.

Now retired from the Army, Piper learned how to teach dogs to be a companion and helpmate for veterans with a psychiatric problem. She formed a non-profit tax-exempt company she named Healing4Heroes (H4H) and started to work on providing trained dogs to veterans considered to be a suicide risk. 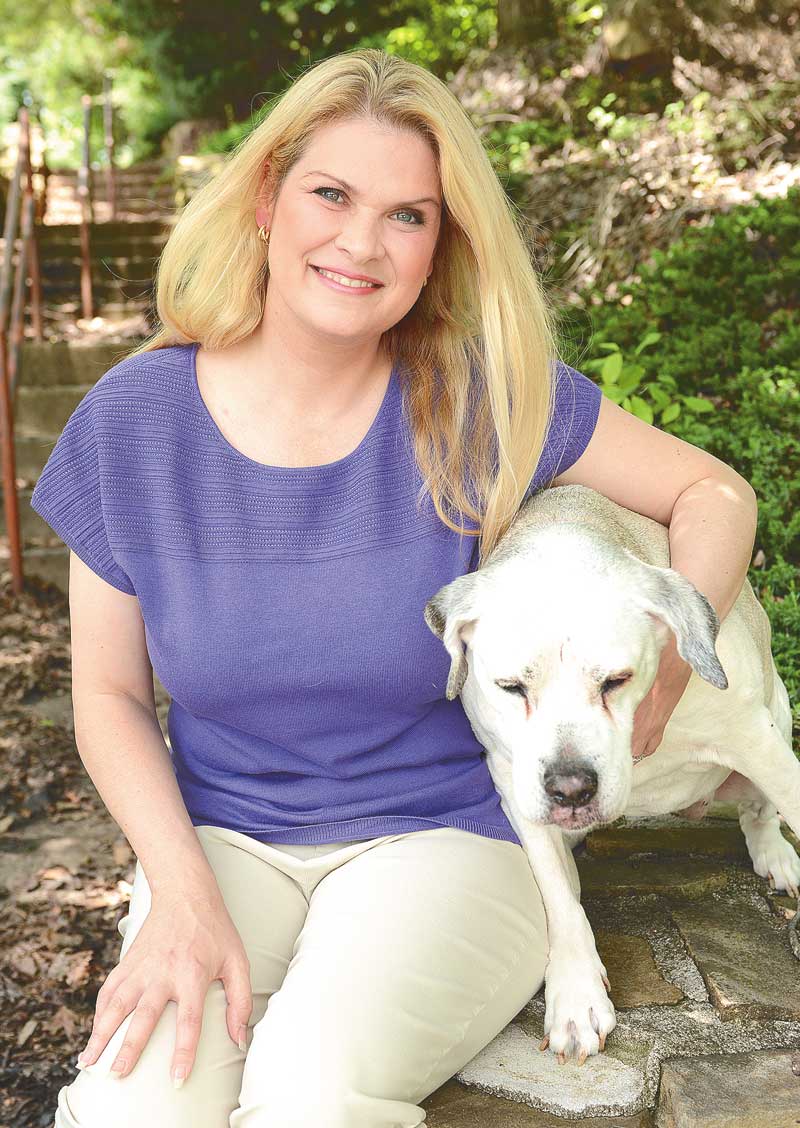 Piper finds her dogs at local animal pounds, often just hours before they are scheduled to be put down. To select dogs with suitable temperament, she plays with them, treating them as unruly children would, opening their mouth to look inside, pulling their tail, teasing them with a cat and so on to test their composure and tolerance.

Each dog has to go through the normal veterinarian process for shots, be spayed or neutered, boarded, fed, have a crate, ID tags, and any other conditioning needs.

When the dog is ready to be trained, either Piper or another H4H trainer spend an entire week with the veteran and the dog.

They spend three days on American Kennel Club’s “Canine Good Citizen” program of 10 learned skills: accepting a friendly stranger, sitting politely for petting, sitting politely for grooming, walking on a loose lead, walking through a crowd, sitting down on command and staying in place, coming when called, reaction to another dog, reaction to distraction and supervised separation, which means leaving the dog with someone else.

At the end of these three days, the veteran has learned the method of training his own dog, important since dogs respond best to their trainer.

The following four days of harder work teach the dog what the veteran uniquely needs, like be a faithful companion, wake them up from a nightmare or flashback, remind them to eat, nudge them to take their medication, interrupt an anxiety attack, get in and out of a car.

They also learn to stand post guarding the veteran’s personal perimeter; some combat vets in their hyper-vigilance don’t like people approaching too close unexpectedly, especially from behind even if they are just in line at a store paying at the cash register. For one veteran the comfort zone might be a three-foot perimeter, for another six feet, and the dog will stop someone approaching their limit by politely blocking the way, sitting to be petted.

At the end of the training week the veteran and dog are left to live together until the next step four months later, but in the interim H4H requires video clips and activity logs to make sure the veteran is following through.

Four months later Piper gathers a group of veterans with their dogs in Peachtree City for the final test to certify each dog as a Psychiatric Service Dog according to standards set in the Americans with Disabilities Act.

For these tests of canine behavior and following commands she wants a distracting public environment so she takes them where her veterans and dogs have been welcomed with open arms – special thank you shout-out to Target, Home Depot and Walmart.

When she does these certification tests, Piper says her standard is to expect perfection from each dog, and they do not disappoint.

H4H has veterans here in Georgia and all over the U.S. with their dogs, and one in Japan. Maybe you wonder how much help the dogs really deliver to the veterans. 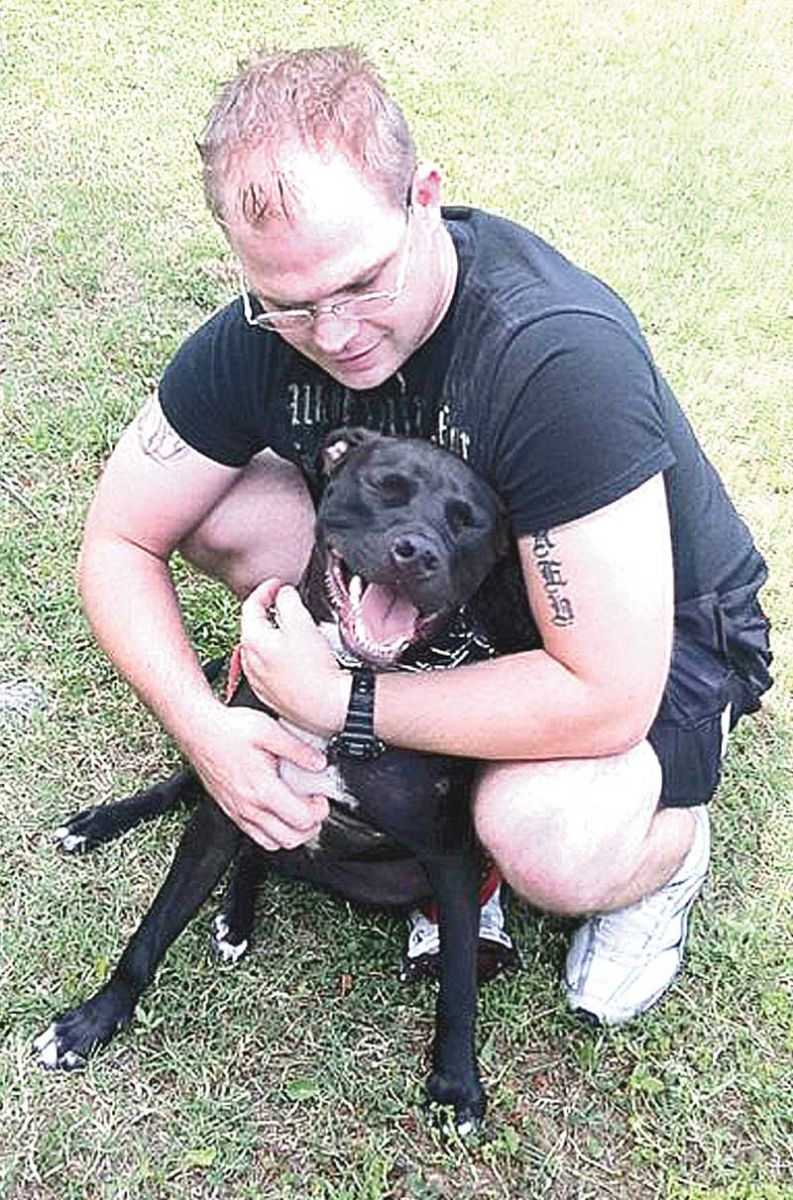 One of Piper’s veterans would frequently wake with paranoia about intruders in the house, and in his frantic search of his home he was upsetting his own family. His H4H dog learned to clear each room for him and then to signal all was clear, calming his fears.

A veteran living in a remote part of Alabama went through the program with Piper and his new H4H dog, Koda. One day he succumbed to his demons and walked out into the woods with a pistol, determined to kill himself. Koda found him and stubbornly stayed with him even though he yelled at the dog and threw sticks at her, trying to make her go away. That veteran and his best friend Koda are still part of Piper’s program today.

Another veteran had prolonged blackout spells. He wore an emergency alert button on a necklace and with H4H’s help trained his dog to step on the button when he was blacked out. When the monitor alarm was answered remotely, if the veteran had not awakened the dog would bark, a pre-arranged signal to send the EMTs.

A veteran living in Griffin has a dog named Abby, his second Psychiatric Service Dog from H4H. When age overtook his first dog, Buddy, he was distressed when Piper told him Buddy had to be retired. He thought he was losing his best friend, but his face lit up when she told him he could keep Buddy and she would help him train another dog. Buddy had been critical to him after the Veterans Administration took him off his medications cold turkey.

Now when his new dog, Abby, returns home from a full day at the veteran’s side, she flops down to be lazy while Buddy takes over at home as his constant companion. This veteran has been through 280 hours of training, the first one to meet Piper’s new higher standard, and his medical at-risk profile has been substantially improved.

Last year the Wounded Warrior organization referred 29 at-risk veterans to Piper but sent no money to help make the solution possible. And therein lies the problem.

Putting a dog in service and getting them certified takes about $5,000. While H4H doesn’t charge any fee to the veterans they serve, Piper does ask them to help her raise money, but funding trickles in far too slow while at-risk veterans wait … and wait.

Locally, Piper is grateful for individual and business contributors. She sends a Star-Spangled thank you to Wyndham for all they do for veterans, and special thanks to Whole Foods, Gremlin Growlers, Brickhouse, Fur Seasons Pet Resort, Jeckle & Hyde, and even Starship. That’s right, folks, the sex toy shop nobody wants nearby gets a salute because they stepped up to support our veterans.

Piper has veterans waiting here in Georgia and in California, Wisconsin, Ohio, Texas, Mississippi, North Carolina, Virginia, Utah and too many other states to mention. Out of frustration Piper says sometimes it seems people are eager to donate to save a dog, but drag their feet on donating for a veteran with a dire need.

Consider this: in the past serving our country was spread among a large part of the population by the draft. We have now raised generations who know our all-volunteer military as a service someone else performs, and many don’t even know anyone who serves.

And so we elect politically-savvy weak minds to lead from Washington, D.C., and to make decisions that send our volunteer warriors to lousy places to do America’s dirty work again and again while you and I don’t have to do a thing other than continue our lives uninterrupted.

We can’t fix and we will never know what haunts these veterans, but here is a chance for all of us to do something real to help them. Our personal donation will help, and a successful local business might proudly sponsor a veteran and his or her dog.

Meanwhile, here’s a fun way to support the program this week.

On Friday, Feb. 22, they are hosting Mardi Gras Rendezvous at the Flat Creek Club in Peachtree City at 7 p.m., $55 per person on the website or at the door and all proceeds go to the next Healing4Heroes veteran/dog training class. Command Sgt. Major (US Army, Ret) Michael Bush will be the speaker.

Treat yourself to an evening of festive music, champagne toast, buffet, cash bar, silent and live auction and other Mardi Gras merriment. You could help throw a lifeline to a vet while having a good time. Woof!

[Terry Garlock occasionally contributes a column to The Citizen. His email is terry@garlock1.com.]