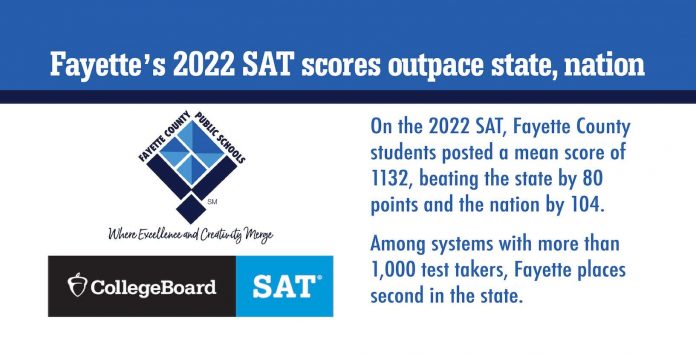 McIntosh High had the 15th highest average in Georgia —

Fayette County’s public high school students again greatly outpaced the rest of Georgia and the country as a whole on the 2022 SAT, according to results released by the College Board.

Fayette County Public Schools students posted a mean score of 1132, beating the state mean by 80 points and the nation’s score by 104 points. The mean is the sum of all scores added together and divided by the number of scores, and is what most people understand as the “average.”

Fayette has the second highest mean score in the state and metro Atlanta when compared to systems with more than 1,000 test takers.

In a comparative breakdown of the mean score, Fayette had an evidence-based reading and writing (ERW) mean of 571; the state posted a 536 mean and the nation a 521 mean.

Out of the 393 Georgia High Schools with 2022 SAT scores, all five Fayette high schools ranked in the top 33 percent in state.