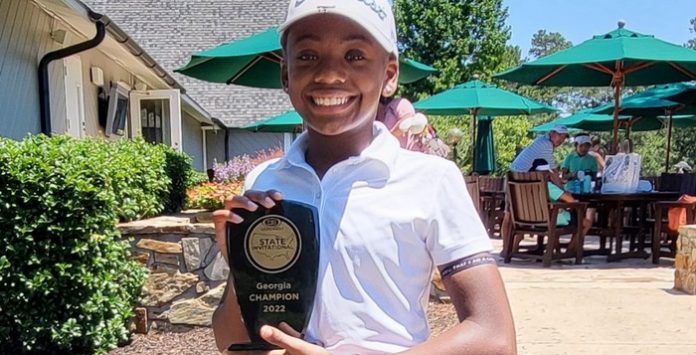 The venue, Callaway Gardens Mountain View course; the event, U.S. Kids 2022 Georgia State Invitational. Vivian Lott (age 10 at the time) has a one-shot lead heading to the last hole. She’s been in this position before and knows how important this tee shot is. Vivian sets up to the ball and fires a shot right down the middle of the fairway. “This time will be different!”, she thinks to herself.

Just last year Vivian had a 2 shot lead with two holes left, but unfortunately stumbled coming in to finish solo second. “This time will be different”, she reminds herself again as she sets up to hit her approach shot to the green. She swings and hits her approach shot to 15ft.

“Yes!”, she shouts out, knowing she can two-putt from there to win. Her dream would finally come true a few moments later as she taps in for par. Vivian was finally a Georgia State Champion!

For the past 11 years, Vivian Lott has been a resident of Fayette County. Her parents, Richard and Brittny Lott, introduced her to the game of golf at the age of one. Vivian caught on fast and would soon find herself swinging to a song her dad came up with, “Two hands, two hands, two hands let’s go…. One…. Two…. Three…. and swing!”. Vivian was a natural and would soon be taking swings on her own.

At five years old, Vivian was the youngest competitor at the parent and child tournament held at Charlie Yates golf course. With her dad as her teammate, Vivian and her dad finished tied for 1st, but would unfortunately lose due to a scorecard playoff. At 7 years old, Vivian would record her first tournament win on U.S. Kids at Chattahoochee Golf course. Vivian recently turned 11 years old and has already won over 35 tournaments. She is a two-time Georgia State Golf Association (GSGA) All Star, and a Peggy Kirk Bell Order of Merit Champion. She is one of the top junior golf girls in GA, and most recently the 2022 GA State Invitational Champion with a two-day total of -3 under par.

Vivian has a very bright future in front of her, and she is incredibly competitive and loves to win. Her goal is to eventually play on the LPGA tour and be a catalyst for other young girls aspiring to play golf. Vivian’s favorite golfer to watch, when he plays, is Tiger Woods, and for the LPGA, she enjoys watching Nelly Korda. In her downtime, Vivian enjoys playing with her brother, watching movies, and taking family walks.

Vivian is developing into a premier golfer and the expectation is that she will continue this path. Vivian participates in at least 30+ golf tournaments each year. You can follow Vivian’s accomplishments on instagram @vivianlpga. If you would like to support Vivian in the form of a sponsorship or make a donation to further her competition in future elite events, please email vivian.lott@myvisiongolf.com.