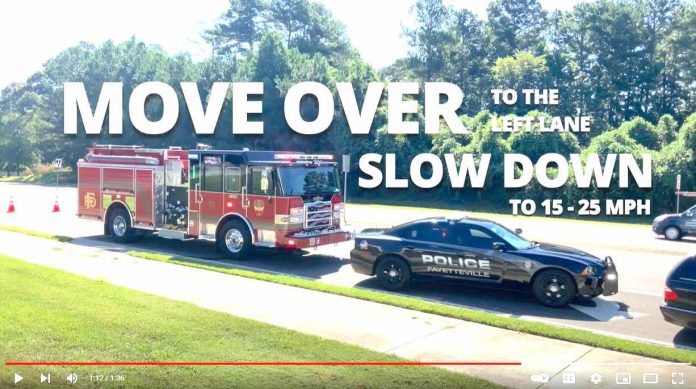 The Fayetteville Fire Department and Police Department have collaborated to produce a public safety advisory video reminding the public to “move over” when they see actively engaged emergency services vehicles on the side of the road.

Not only is this a helpful safety measure that drivers can take, but it is also mandated by Georgia law.

According to the Georgia Governor’s Office of Highway Safety, “Motorists travelling in the lane adjacent to the shoulder must move over one lane when emergency and utility vehicles are stopped on the side of the highway and operating in an official capacity. Vehicles included in the law include all first responders (law enforcement, fire, EMS), utility vehicles, Department of Transportation vehicles, H.E.R.O. Units, and wreckers tending to an accident.”

If it is impossible for a vehicle to safely move over to another lane, the driver should “reduce the speed of the motor vehicle to a reasonable and proper speed for the existing road and traffic conditions, which speed shall be less than the posted speed limit, and be prepared to stop.”

Because everyone’s safety is important, personnel from the city’s Fire, Police, and Communications departments collaborated to produce this engaging “Move Over Fayetteville” video with clear messaging on how motorists can help keep emergency workers safe on the roadside. The video has been published on the city’s YouTube channel, and it will be promoted throughout the community, including on the city’s other social media channels and website.