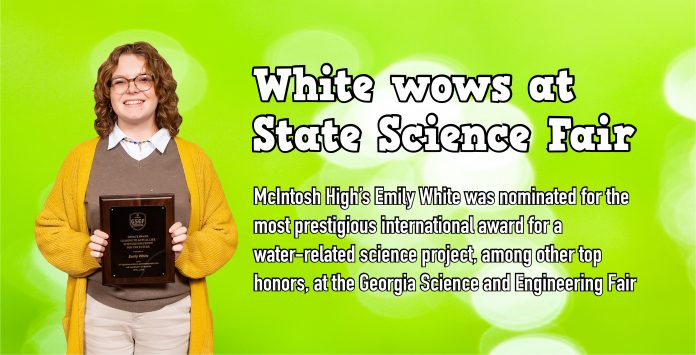 Competing among the brightest minds in the state, McIntosh High’s Emily White stood out as a rising star at the 74th Georgia Science and Engineering Fair. White was recognized with a number of awards and commendations for her project, “Sustainable Habitats for Crassostrea virginica,” that studies the use of artificial oyster reefs as a method for conservation of the Eastern Oyster in Apalachicola Bay.

White was the winner of the Impact Award given for leading actual life sciences solutions, and she was one of three winners of a GENIUS Olympiad recommendation for the project. She was also winner of the NASA Earth System Science Award, Senior Division Best in Category – Environmental Engineering, winner of the National Geographic Society “That’s Geography! – Cultivating Empathy for the Earth” Award, a Senior Division Top 10 Grand Award winner, and honorable mention for the Georgia Aquarium Conservation Award.

White was also nominated for the Stockholm Junior Water Prize Regional Award, the most prestigious international award for a water-related science project at the high school level.

For the project, she formulated six different concrete mixtures to be used for the reefs, and then constructed about 60 sample reefs with the help of the freshmen STEM cohort at McIntosh. The samples were used at the Florida State University Coastal Marine Lab, where she placed them into the water, left them for around 50 days, and then counted how many young oysters, or spat, had attached to the reef, determining which concrete mixture worked best for conservation purposes by analyzing which mixture attracted more spat.

White obtained corporate sponsorship for her project through Yamaha. She worked with a researcher from the Florida State University Coastal Marine Lab who is overseeing the deployment of her reefs in the bay, and she will work on extending her project this summer using fluid dynamics with a research lab at Georgia Tech.

Next up, White will compete at the Regeneron International Science & Engineering Fair for the second time.