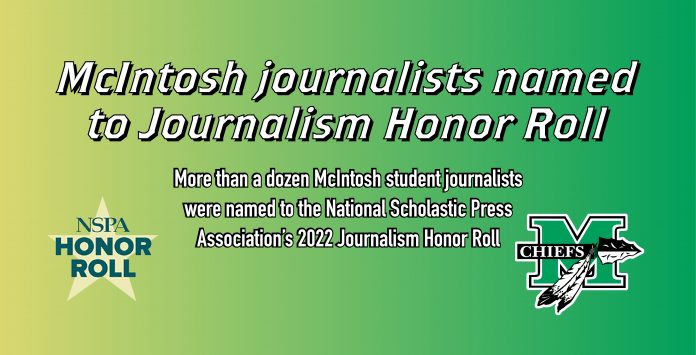 The yearbook and newspaper for McIntosh High are in good hands, with more than a dozen staff members named to the National Scholastic Press Association’s 2022 Journalism Honor Roll.

In addition to serving for at least two years on a high school student media staff, in broadcast, newspaper, magazine, online, or yearbook, students have earned a 3.5 or higher grade-point average on a 4.0 scale. Publication advisers and journalism instructors have nominated these students for the honor.

Senior inductees are eligible to compete for a $1,000 Honor Roll Scholarship, and NSPA will announce the scholarship winner in May.

Through education, training, and recognition programs, NSPA promotes the standards and ethics of good journalism. Its educational programs, both on-site and virtual, train thousands of student journalists and advisers, and its awards programs include the Pacemaker Award, the nation’s preeminent publication honor.

Follow The McIntosh Trail’s coverage of everything McIntosh High at mhstrail.org.