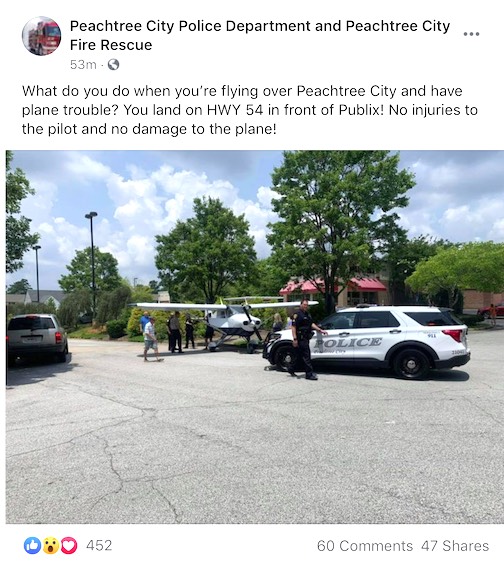 A sight most drivers have never seen: a single-engine private plane touching down on the pavement of Ga. Highway 54 East in front of Lexington Circle and near the Publix East shopping center Sunday afternoon.

Nobody was hurt, and the plane was undamaged, according to Peachtree City Police. The plane was later towed to a more appropriate parking area.

Police Department spokesman Chris Hyatt said the plane made an emergency landing in the area of Ga. Highway 54 and Lexington Circle near the Publix grocery store.

Hyatt said the plane was forced to land around 1:30 p.m. July 25 due to a fire in the cockpit area, and was subsequently moved to the shoulder of the road.

There were no injuries in the incident and no damage to the plane, Hyatt said.

Hyatt said the plane was piloted by a 55-year-old female flight instructor, with a passenger also onboard.

The plane landed in traffic and maneuvered out of the way, Hyatt said.

The plane had departed Cartersville on the way to Locust Grove, Hyatt said.