A new 89-unit townhome development within walking distance of downtown Fayetteville got its first official introduction to City Council June 3.

Sandwiched between apartments and a senior living facility off Ga. Highway 54 West, the 8.13 acres parcel now under contract to Caballero Holdings, LLC  is currently zoned for 144 “age-targeted” for-rent residential units. The requested rezoning would reduce the residential units to 89, only 14 of which would be allowed to be rental units, according to the plan presented to the council.

As City Planner David Rast noted, the property was rezoned to higher density in 2014, “then sat undeveloped” until now. It fronts on Campaign Trail, a relatively new road that connects to LaFayette Avenue, which loops between Ga. Highway 85 and Hwy. 54 West, passing Fayette County High School and the old high school that now houses the school system central offices and the Board of Education meeting room.

The developer said the estimated price range for the “upscale” townhomes would be “the mid 300s, but maybe higher,” depending on the cost of lumber to construct the units. He noted the company was paying “$38,000 more for lumber to build one unit than a year ago.” Expected sizes will be from 2,200 to 2,600 square feet each.

The townhomes will be in 2-story and 3-story buildings, many with garage entry on the rear. 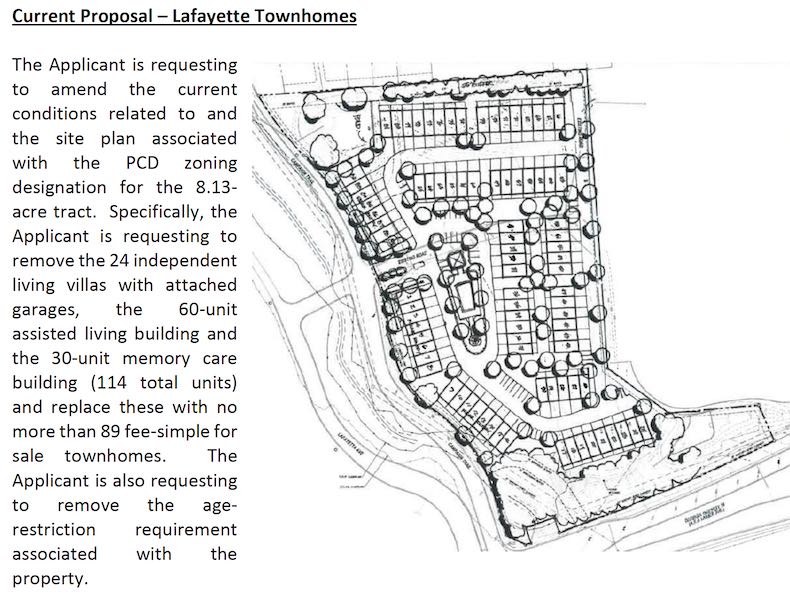 In other land use changes, the movie studio complex along Veterans Parkway and Sandy Creek Road expands with the June 3 council approval of a rezoning of 24.5 acres from R-70 residential to BP-Business Park use. The tract is the northernmost portion of what used to be Pinewood Studios but is now named Trilith.

Developer Rick Halbert told the council the Trilith property will be used to house one tenant, Manhattan Beach Studios, in a 100,000 square-foot office/warehouse combination. MBS supplies production equipment and services for a variety of content makers, according to the MBS website.

One nearby resident lamented the loss of open fields and pastures on her adjoining 50-acre property. “We’ve enjoyed the greenbelt of the county,” she said. “Don’t let it turn into the warehouse belt for Amazon warehouses.”

The vote was unanimous in favor of the rezoning.

The council approved on second reading the rezoning of 3.2 acres at 305 Beauregard Boulevard to accommodate an environmental education center for the Southern Conservation Trust. A free-standing barn will be used for outdoor classes and events, city staff said. The parcel changes from R-30 single-family residential to C-1 Downtown Historic Mixed-Use District.

The council approved the request of Police Chief Scott Gray to budget $11,450 for the preparation and application to receive CALEA accreditation within the next 18 months. The department already is accredited by the state of Georgia, while CALEA would be a steeper climb to achieve national accreditation. Within Fayette County, the Peachtree City Police Department has received CALEA certification.

The June 3 council meeting marked an historic turning point. It was 25 years ago that city offices moved from a former residence and an old railroad depot building on East Lanier Avenue to a refurbished school building two blocks south of the courthouse square. Last Thursday was the last such meeting in the now decommissioned City Hall.

The next scheduled council meeting on June 17 will be held in the brand new City Hall on Stonewall Avenue, built on the site of the old school system central office and bus barn.