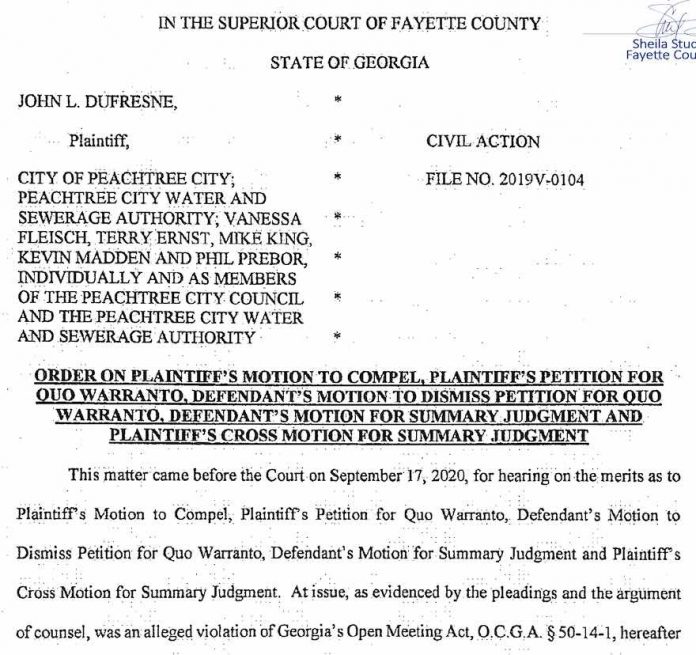 Former Peachtree City Water and Sewerage Authority (WASA) Chairman John Dufresne had his day in court after filing an open meetings lawsuit against the WASA board of directors, which since 2018 has been the five members of the City Council.

Superior Court Judge Ben Coker on Sept. 22 ruled in favor of the WASA board, finding no violation of the Georgia Open Meetings Act and no illegality in council members serving as members of the WASA board.

Dufresne alleged that the WASA board violated the Georgia Open Meetings Act by discussing insurance plans for WASA employees in executive session when the subject matter should have been discussed during the public meeting, the court said.

The court found that it was proper on the part of the WASA board to discuss the matter in executive session.

Represented by attorney John Mrosek, Dufresne also alleged that City Council members simultaneously serving on the WASA board created a conflict of office, and that the City Council exerts regulatory or supervisory authority over WASA.

Dufresne had argued that the Peachtree City Council’s true intent (by becoming the WASA board) was to punish the former WASA board over disagreements concerning the extension of sewerage services to other municipalities, the court document said.

The court said each party will be responsible for their own attorney’s fees.

Believing the ruling to be in error, Mrosek said his client is contemplating an appeal to Coker’s decision. Dufresne has 30 days from the date of the ruling to appeal.