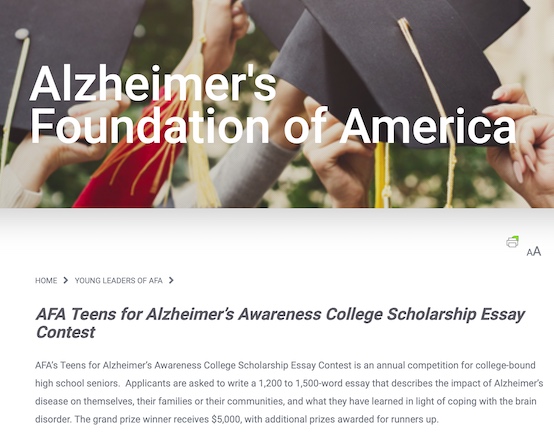 The Alzheimer’s Foundation of America (AFA) recently named Fayetteville resident Camden Sutherland as a runner-up in its national 2020 Teens for Alzheimer’s Awareness College Scholarship Essay Contest and awarded him a $500 college scholarship.

Sutherland was chosen from nearly 2,000 entries nationwide for his essay about his experiences with his grandmother who lives with Alzheimer’s disease and how it impacted his life, according to AFA.

“Camden’s heartfelt essay about his grandmother, her battle with Alzheimer’s disease, and the lessons he learned from those experiences will help raise Alzheimer’s awareness and provide strength and support to families who are dealing with the same challenges,” said Charles J. Fuschillo, Jr., AFA’s President and CEO.  “We congratulate Camden, thank him for sharing his story, and are grateful for his efforts in the fight against Alzheimer’s disease.”

Sutherland’s essay focuses on his grandmother’s battle with Alzheimer’s disease and how it impacted his family. His grandparents moved closer to them shortly after his grandmother was diagnosed with minimum cognitive impairment and later Alzheimer’s. Over the last few years, her memory has gotten worse. Her husband spends all his time taking care of her while Camden’s mother helps out as well. Camden’s essay focuses on support and financial costs associated with Alzheimer’s disease. Camden’s family is their only means of support, according to AFA.

His grandparents have sought out long-term care facilities, but the problems they have been running into is that the facilities will not allow them to live together as his grandmother needs to be in a memory care unit. In addition, the health care costs, whether in a facility or at-home care, are exorbitant and they cannot afford it. Although Camden’s grandmother is still functional, there is concern for her well-being and care, AFA said.

Camden plans to pursue a degree in business and law. He aims to raise awareness and help fund research. He wants to advocate for continued support and would like to create a service that offers easy access to information regarding Alzheimer’s as well as easy access to medication needed to treat the disease, said AFA.

AFA’s annual Teens for Alzheimer’s Awareness College Scholarship Essay Contest asks high school seniors to describe how Alzheimer’s disease impacts their lives, what they have learned in the face of coping with it, and how they plan to help others who are affected by it.