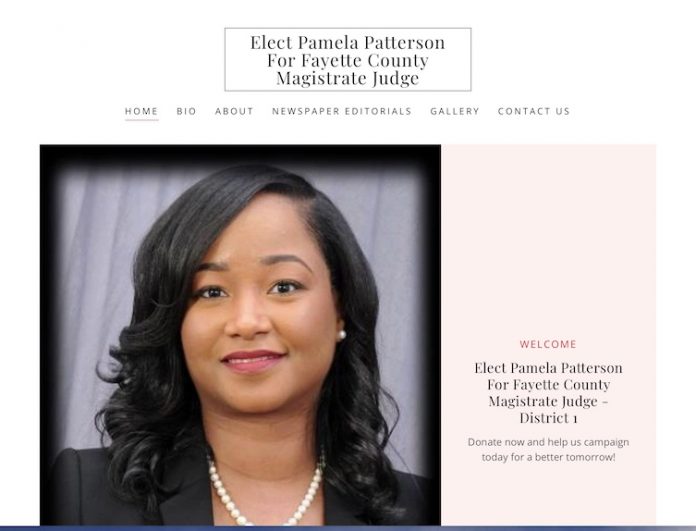 Hello, Fayette County residents. My name is Pamela Patterson and I am asking for your vote for Fayette County’s next Magistrate Court Judge, Post 1.

Before I begin, I would like to address my article’s timeliness. Before the main article initially ran, I was not sent the questionnaire. When I became aware of the article after publication, I requested the opportunity to respond. My responses are as follows:

When I chose to become an attorney, I made a decision; I decided that I was not going to work for a major corporation and I wasn’t going to be the attorney portrayed on TV as a wealthy, cold and uncaring person. I decided instead to serve the public.

For nearly my entire career I have served the public as an assistant district attorney, assistant public defender and child attorney, representing children taken from their families because of abuse and neglect.

Working for people without the mental capacity to speak for themselves, the homeless, the poor and impoverished and abused children has shown me things that the average citizens will never see, but that most people appearing before a judge live with on a daily basis.

We need judges that recognize these litigants as the people they are, meet them where they are and treat them as they would any other person that stands before them. Working as a public servant has shown me this need and I have worked tirelessly to ensure that this need is fulfilled.

I have also maintained a private practice handling criminal cases and civil cases involving small claims, contract and family law disputes. At every point in my career, I have worked as a trial attorney, representing not only my clients, but also justice, equality and fairness within the legal system.

This type of experience matters in a judge because their decisions affect and can significantly change people’s lives and that experience is needed in Fayette County.

Our community deserves judges who know that all people should be treated equally and no one person is better than the next; we are all equal, important and worthy of respect.

I have not lived a life of privilege. I, like many, was raised in a single parent household. I know what it is like to be poor, looked down upon, to not be given a chance and to have to work twice as hard to be seen as equal to my counterparts. Growing up in a single parent home with four children, I watched as my mother worked multiple jobs to feed us while she attended school. I watched in amazement as she pulled herself and our family through societal ranks. While doing this she also instilled in us empathy, grace, humility and a sense of fairness.

These may not be common experiences for most people, but they are shared and relatable experiences to many who appear before the court. The traits that my mother instilled in me are not inherent in everyone, but they are inherent in good leaders and that type of leadership is needed in a judge. My experiences have shaped me and allowed me to see the humanity in other people.

If you know it, you show it! I have worked with and for communities and the downtrodden. I have also defended people accused of crimes that lead others to question why I would represent them. For every person and every community that I have represented, I at all times have recalled my mother’s words, everyone deserves a good defense.

My mother is not a lawyer, but she taught me to respect all people, to be caring, gracious and grateful. Through working as an assistant district attorney, a public defender, private practitioner and as a child attorney I saw the need in the judiciary to preside over cases with compassion, to listen to litigants and to make everyone feel heard.

When the pandemic hit, I didn’t stop working despite the fact that there was a shutdown. I didn’t stop because abuse, inequity and violations of civil liberties didn’t stop. My clients typically come to me because an emergency has happened to them. A pandemic caused them to stay in their homes, and for many it caused their abuse to get worse because there became no means of escape.

So, I continued to work. Though my venue where I advocated and communicated changed (I stopped appearing in a courtroom and began appearing before a camera), my voice, desire, commitment and compassion did not change.

As the saying goes, leaders are not born, they are made. I have tirelessly stood in the face of harrowing odds when other would not. I have successfully challenged false accusations facing innocent people and stood tall and firm for the small guy, protecting their rights and dignity. I will continue to do what is just and right if elected judge. Title changes will not affect my leadership, I have been and will remain a leader.

How I differ from my opponent

My opponent has written that she strongly disagrees with me that integrity and equality need to be restored to the Fayette judicial system. This is where we differ and where being a leader becomes important.

Leaders must have the ability and the willingness to spot issues, especially within your own organization. When you see a problem, you correct it; and if you do not you become a part of the problem.

Despite the suggestion of some, that all is well within our judicial system, we have citizens that are not treated equally and fairly. As it happened, no one with the power to stop or change what was happening intervened. While some will say that those problems no longer exist or do not exist within certain courts, that argument is flawed because it does not recognize that disparity is a systemic and system wide failure that needs to be rectified at all levels and in its entirety. One part of a house doesn’t crumble without affecting the rest of the house.

That is why I say we need to restore integrity and equality into Fayette County’s judicial system. It takes a strong person to be a leader and leaders act with compassion, humility and fairness. Again, these traits are not inherent in everyone, but they are inherent in good leaders and if elected I would bring that type of leadership to the judicial bench.

It is for these reasons that I humbly ask that you cast your vote for me, Pamela Patterson, for Magistrate Court Judge on June 9th.

For more information, please visit my website at pattersonforfayette.com.