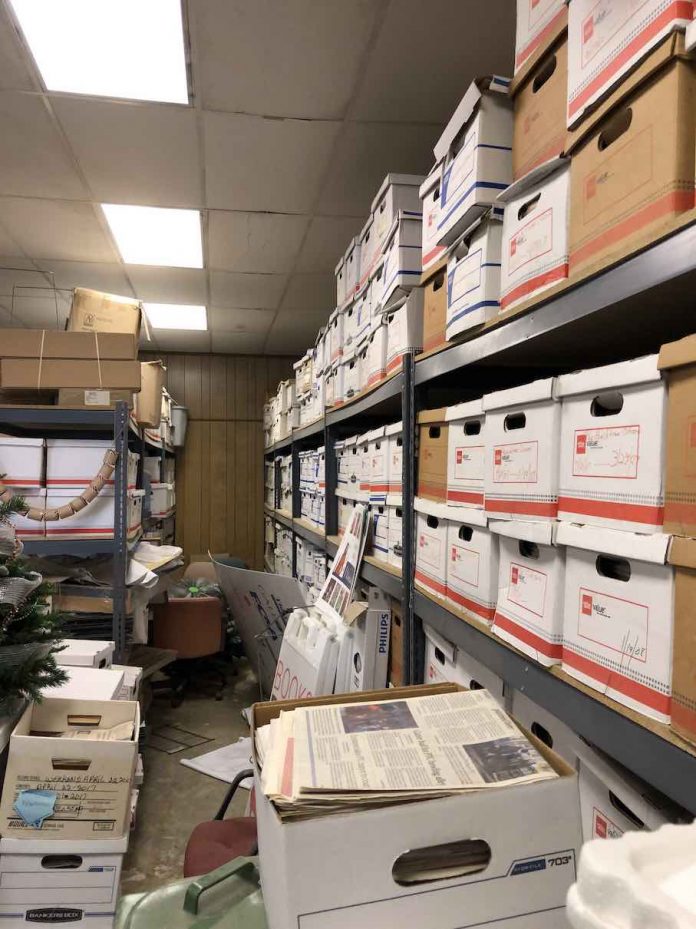 So here’s the scene: A 3,000 square-foot rented warehouse full of the last 26 years of The Citizen newspapers, assorted tables, desks, chairs, and stuff from offices no longer needed.

Here’s what’s about to happen:

A hard-working crew from A Better Way Movers will come in and empty that warehouse down to the concrete.

Some items will be donated to be re-sold by the charity, but a lot of the stuff — including bankers boxes from February 1993 onward to the last printed copy in August 2019, stuffed with single copies of newspapers we published every week — is headed for the landfill.

The other stuff I can live without: particle-board desks, a tabloid-size color laser printer that’s nearly a decade old, assorted office supplies, etc.

It’s those print newspapers from years past that I regret most having to dump. Some would say that they missed their true calling, and I respond that they would wrap a lot of fish in paper blankets of news from years that will never return.

I’m seeking a home for the big books of bound copies of newspapers beginning in 1993. Libraries, unfortunately, have space limitations, and those bound copies — probably 50 or more volumes, since some years took two books — take up a lot of space that could be put to use for books published in the past 26 days.

Online, we subscribe to a service that turns our pdf files of papers into a facsimile of a page-turning edition, but it goes back only to Jan. 1, 2011.

Every paper we ever produced and printed — all those tens of thousands of pages filled with stories and photos of Fayette and Coweta people — no longer exist, except in those marked boxes of weeks in warehouse racks that soon will be empty.

Today I could recover the answer to that question from an archived box containing the papers from that week. An actual, physical record of life as recorded in black ink on white newsprint.

Tomorrow that record will be gone, and it will never return.

I’m a hoarder, a collector of weeks in a building that will soon make room for a new tenant.

Another sadness is the packs of photographs filed away of people we took pictures of in those years before the iPhone and digital cameras. Many children now grown, many adults now no longer living. All headed for the landfill.

I fervently wish I had a workable solution to another example of the old making way for the new. I don’t. Life goes on. Old newspapers don’t.

As the publisher of a newspaper that no longer exists, I thank your for your readership, your advertisements, your tolerance of the occasional soggy editions in your driveways, and for your presence in those pages soon to be gone.

It was a high privilege to serve you with a product that contained a record of your joys, sorrows and accomplishments — that you could hold in your hands and immediately fold into a fly swatter if needed.

We’re all online now, digital editions that retain some semblance of permanence, but without the requirement of expensive warehouse space. And, indeed, I am typing in bits and bytes for storage in the cloud. The old has to make way for the new.

But something is lost. And is not recoverable through faster download speeds and Photoshopped images. So our newspaper has become kin to steam locomotives and covered wagons.

I acknowledge that many would disagree as to the depth of the loss to modern life and even to our finny friends. They would say the fish deserved better.

[Cal Beverly is publisher of the online local news site, TheCitizen.com. He published newspapers every week from the second week of February 1993 until Aug. 28, 2019 from an office and warehouse in Fayetteville, Ga.]