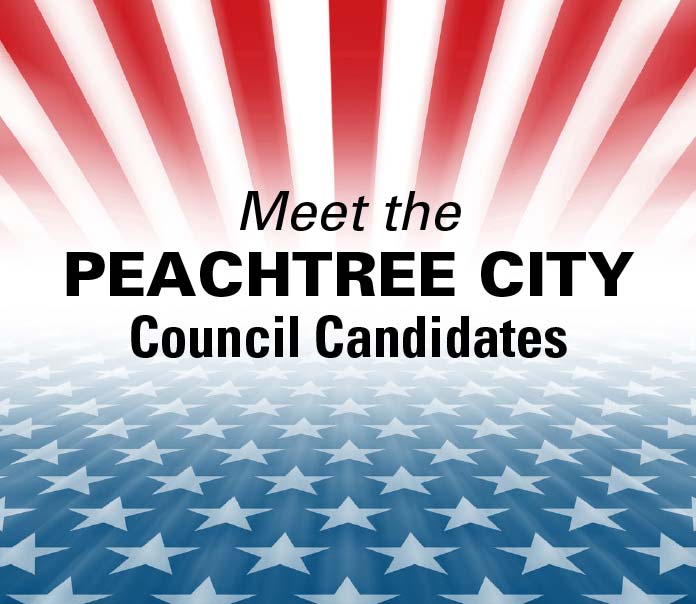 In Peachtree City, four candidates initially qualified to run for City Council Post 2: the incumbent Michael King, and three challengers, Darryl Csicsila, Steven Newton and Chad Kidwell. Kidwell subsequently withdrew from the race and did not participate in our questionaire.

1. Introduce yourself to our readers: Who are you, how old are you, what is your current job, what kinds of jobs have you done, how long have you been in Peachtree City and why are you running for public office this year?

DARRYL CSICSILA — My name is Darryl Csicsila and I am 42 years old. I moved to Peachtree City in 1984. I moved away for about 15 years and returned back about 5 1/2 years ago. Currently I am my father’s caregiver. However I have always worked in the hospitality industry. I am running for office this year because I want to try a new chapter in my life.

MICHAEL KING (incumbent) — A career military officer, Mike, Shirley and family were transferred to the Atlanta area from Wiesbaden, Germany during the summer of 1987. Having been advised to see Peachtree City while in Europe and taking a week-long house hunting trip was all that was required to convince the Kings to choose Peachtree City as their new home. Little did we know that some thirty-two years later it would still be home.

A native of Hartsville, South Carolina, Mike was inducted into the U.S. Army in the spring of 1969, commissioned in the spring of 1970 and completed rotary wing flight training in the summer of 1971 prior to being deployed to South Vietnam as a scout pilot for two separate air cavalry units. These two assignments ranged from the lofty mountain ridges along the Demilitarized Zone in the north to the flat expanse of the Mekong Delta in the south.

His career continued in both aviation and ground assignments within the United States and overseas, culminating as the Commander of Troops at Ft. McPherson/Gillem until his retirement in 1993. Follow-on vocations included commercial fleet sales with Ford Motor Company and as a contracted planner for the Centers for Disease Control in Atlanta.

Two volunteer programs, Meals on Wheels and mentoring young boys without dads, are considered time well spent since full retirement in 2011. Additionally, frequent workout sessions at Fitness 54 must be included. Last, but not the least of which, serving on the Peachtree City Council for the past five years has proven to be most rewarding.

Mike and Shirley are the parents of three children and the doting grandparents of two. “I am 70 years young.”

Prior to law school, I was employed as a Legislative Assistant to the Georgia Beverage Association and Legal Assistant to a large law firm in Birmingham, Alabama. Since August 2012, I have been an attorney in Biloxi, Mississippi, New Orleans, Louisiana, and the greater Atlanta area.

I lost my father unexpectedly two and a half months ago. My father always taught me to “give back” and be involved in the community. I am running for city council to serve the community and honor my late father.

I am also running because the city council should be more transparent, accessible, and accountable to Peachtree City citizens. The city council’s consideration of using taxpayer funds to sue citizens is another reason I decided to run for Post 2.

2. How many City Council meetings have you attended or viewed?

CSICSILA — I have not attended one but have viewed 7.

KING — All but two over the previous four years.

NEWTON — I do not attend the meetings but usually watch the meetings from the City Council Facebook Live stream.

CSICSILA — Keeping the people of the city happy is my top agenda. To do this I will listen to what the citizens of the city would like and not be influenced by corporate America. I will be the voice of the people.

KING — Infrastructure. Prior to my taking office PTC’s streets, paths, stormwater, etc., were allowed to fall below standard primarily due to the recession. Since, having an approved SPLOST, approximately ten miles of street paving have been completed and some nineteen miles are to be completed over the next four years. Multi-use paths are being resurfaced at a pace of nearly ten miles per year, additional paths are being introduced to facilitate connectivity throughout the city, stormwater projects are being addressed and completed at a more rapid pace, all of which and more need to be continued.

As an example, when the SPLOST ends we must continue to fund road/street resurfacing at a level of nearly $2 million just to maintain and not to fall back to where we were.

NEWTON — My top agenda item is to be accountable to the citizens of Peachtree City. The present city council has limited public input to five minutes and failed to cooperate with neighbors to address the traffic congestion. I pledge to always be willing to meet, listen, and understand the citizens’ problems with the ultimate goal to find a solution or strategy to address the issue(s). If elected, I will do so without the threat of frivolous litigation.

4. What two other issues in Peachtree City concern you the most? Please be specific about how you would approach those issues.

CSICSILA — Hands-free law is another issue for me. That goes for golf carts and cars. Way too many people still do not comply with this law. I will work with the police department to try and tackle this issue to keep our citizens safe from harm.

The speed of golf carts on the paths is another area that needs attention. I would like to implement SDASH, which is SLOW Down and Say Hello. We are all neighbors and we should be friendly to one another and make PTC beautiful again.

KING — First, is the diminished industrial space within the city. Because of this we must continue to promote the city through the County Development Authority as well as the city’s Visitors Bureau. We must work with our current industrial partners while encouraging expansion where appropriate (Rennai). We currently fund the Business Retention and Expansion position at the County Development Authority who continues to assist local businesses and maintains dialog with the Mayor and Council.

Second, since we must realize that the current economic upturn will eventually end, we must be prepared to operate the city with reduced resources. The last recession forced previous councils to make budgetary decisions to the detriment of the quality of life we have come to expect. No street paving, laying off some twenty-five Public Works employees, and simply allowing the aesthetics of Peachtree City to suffer are examples.

What I will continue to push is to attain a cash reserve of greater than 50% of our annual budget in order to make up the shortfall in revenue until the next recession ends, and it will.

NEWTON — Responsible development of the limited available property is a genuine concern. The city council must be willing to consider all proposals in the best interests of all citizens and attract industries that are willing to locate here. I intend to consider further residential and commercial development with an open-mind but am particularly concerned with increased development without proper planning for the increased traffic congestion.

Traffic congestion through Peachtree City is a failure of leadership. I intend to demonstrate a willingness to come to the table with the state of Georgia, Georgia Department of Transportation, and local counties and cities to figure out the best solutions to this persistent problem. Passing a local resolution does nothing to alleviate the increased traffic throughout Peachtree City.

5. What is your vision for the future of Peachtree City?

CSICSILA — My future vision of Peachtree City is for everyone to be safe and happy enjoying this wonderful community.

KING — Simply stated, Peachtree City is without doubt the premier location south of Atlanta to raise a family and to conduct business. We must continue maintain this lofty standard and improve upon it.

NEWTON — My hope and vision for Peachtree City is to be the vibrant city that prompted me to move here. A city that is an attractive place to live, work, and raise a family. The city council must continue to invest in the infrastructure, education, and future of its citizens. The city council must cooperate with neighboring cities and governments to address the problems of traffic congestion. City leadership should endeavor to adapt to the needs of its citizens and attract local industries to employ its citizens.