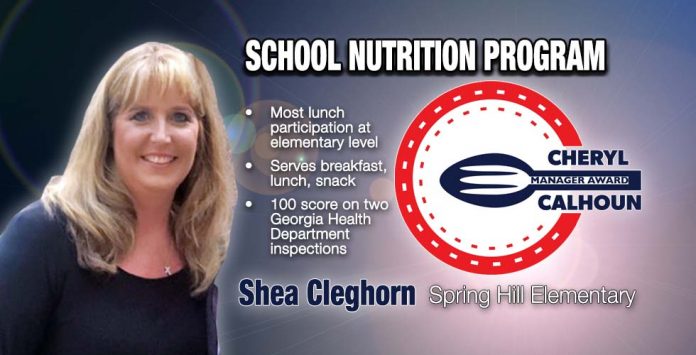 An elementary school nutrition manager has been named the top manager in the county by the Fayette County Public Schools Nutrition Program (SNP).

Shae Cleghorn of Spring Hill Elementary is the sixth SNP manager to receive the coveted Cheryl Calhoun Manager of the Year Award, established by the SNP department to recognize outstanding achievements of school nutrition managers.

Cleghorn has worked for the school system since September 2008 when she was hired as an SNP assistant at Inman Elementary. Nearly a year and three months later, her stellar performance earned her a promotion to SNP manager at Spring Hill Elementary in January 2010.

The school system’s nutrition staff nominates and votes on the individual they feel is the most qualified for the award. According to Kokeeta Wilder, school nutrition director, the following achievements from the 2018-2019 school year scored Cleghorn the honor:

• The school’s nutrition program is financially sound and meets all departmental benchmarks.

Named in honor of the school system’s longest-serving school nutrition director (22 years) who lost her battle with cancer in January 2007, the Cheryl Calhoun Award recognizes nutrition managers who exemplify the professional qualities demonstrated by Calhoun: dedication, hard work, and commitment to excellence.