Replacement school hearings set for next week; public invited to sound off about plan to build new middle school on what is now a dirt road —

With two public hearings set for next week, the Fayette County Board of Education is moving closer to an official final decision on the fate of the first middle school in Peachtree City, J.C. Booth.

The school system sent out an official notice for the Monday and Wednesday public hearings Friday morning.

The notice and the lack of other listed choices to be discussed suggests the decision to build the $46 million new facility on what is now a dirt road is just about a done deal.

And what about old Booth? The system suggests plans are to rent or sell the old facility or to develop a “partnership” with an unnamed college or university.

Booth began its life as a junior high school for grades 7, 8 and 9, which fed into McIntosh High School. The current Booth opened to students in 1979, while McIntosh opened in January 1981.

The Fayette County Board of Education is considering plans to build a replacement school facility for the current J.C. Booth Middle School.

Hearings will be held in the Fayette County Board of Education meeting room located at 205 LaFayette Avenue, Building A, Fayetteville, Georgia 30214.

The proposed replacement facility would be located on Stagecoach Road, off of Robinson Road and south of Georgia Highway 54 in Peachtree City.

The replacement facility would be built to accommodate 1,400 students in grades six to eight.

No other schools would be modified to accommodate current J.C. Booth Middle School students, and current middle school attendance zones would not be affected.

The total cost of the proposed replacement facility is approximately $46 million, which would be funded through local sources, including ESPLOST funds and local capital project funds.

If a replacement facility is constructed, the school system would use the current facility to expand educational offerings in partnership with post-secondary institutions.

The purpose of the hearing will be for the public to make comments and suggestions related to the building of the replacement facility.

The public may submit comments or suggestions in writing to Fayette County Board of Education members at 205 LaFayette Avenue, Building A, Fayetteville, Georgia 30214 or to administrative assistant Kaye Sikes at sikes.kaye@mail.fcboe.org. 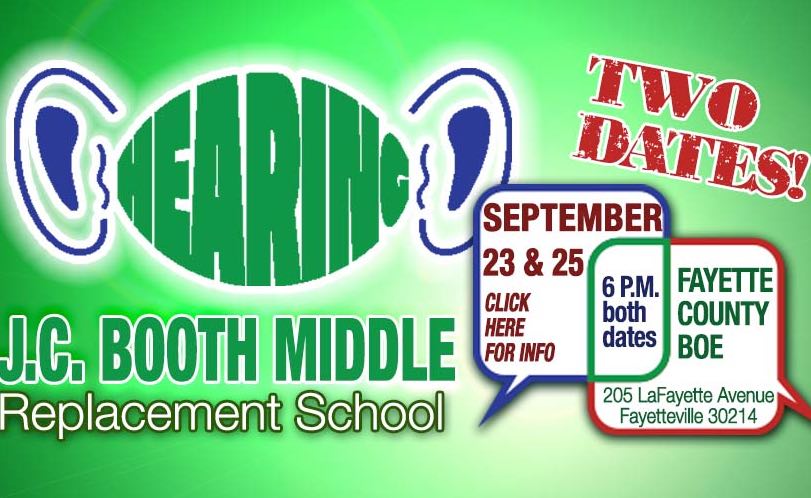 Wife charged after threatening to ram husband through restaurant front