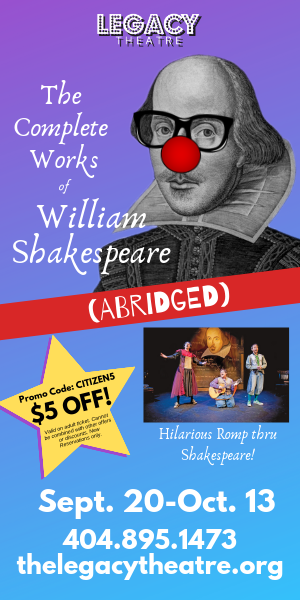 London’s longest-running comedy The Complete Works of Shakespeare (abridged) is coming to the Legacy Theatre! This hysterical parody of Shakespeare’s plays opens September 20 and runs through October 13.
The Complete Works of Shakespeare (abridged) was written by Adam Long, Daniel Singer and Jess Winfield in 1987 and went on to run for nine years in London’s West End at the Criterion Theatre, quickly becoming one of the World’s most popular shows.
The Today Show claims, “If you like Shakespeare, you’ll love this show. If you hate Shakespeare, you’ll love this show!”
An irreverent, fast-paced romp through the Bard’s plays, The Complete Works of William Shakespeare (abridged) is a hilarious night of theatre in the spirit of Monty Python and Benny Hill. Three actors attempt to recreate all 97 of Shakespeare’s plays on stage in just 90 minutes. Join these madcap men in tights as they weave their wicked way through all of Shakespeare’s Comedies, Histories, and Tragedies in one wild ride that will leave you breathless and helpless with laughter.
The production will be directed by Rachael Endrizzi, who is returning after directing last year’s Always Patsy Cline.
“This show is such a joy to work on,” says Endrizzi. “Audiences are going to love this show, even if they know nothing about Shakespeare’s plays. The laughter and the action are non-stop. Plus, it’s never the same show twice! There are elements of improvisation and stand up throughout the show, and it’s got something for absolutely everyone.”
“I’ve wanted to produce this show for years,” says Artistic Director Mark Smith. “I love bringing comedies to our audiences and this seemed like the perfect season for such a fun show. We’re bringing together three of the funniest actors I know for this production and I can’t wait for opening. I don’t think audiences will ever stop laughing.”
The Complete Works of Shakespeare (abridged) stars Legacy favorites Evan McLean, who recently played Miss Trunchbull in this summer’s Matilda, and Ken Quiricone who was last seen as Max in Lend Me a Tenor. Rounding out the cast is Atlanta’s own, Aaron Gotlieb, making his Legacy Theatre debut. 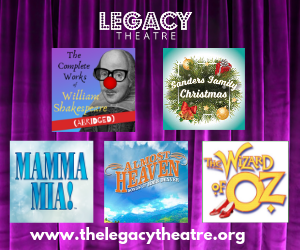 The Legacy’s 14th season continues with Sanders Family Christmas (the sequel to Smoke on the Mountain),Mamma Mia, Almost Heaven: the Music of John Denver, and The Wizard of Oz. Season subscriptions and individual tickets are on sale now.
The Complete Works of Shakespeare runs September 20 through October 13 with performances Fridays and Saturdays at 8 pm and Saturdays and Sundays at 3 pm. Adult tickets are $30-$35. Senior and student discounts are available as well as discounts for groups of 20 or more.
Tickets and subscriptions can be purchased online at www.thelegacytheatre.org or by calling the Box Office at 404-895-1473.
The Legacy Theatre is located at 1175 Senoia Rd. in Tyrone, Georgia.