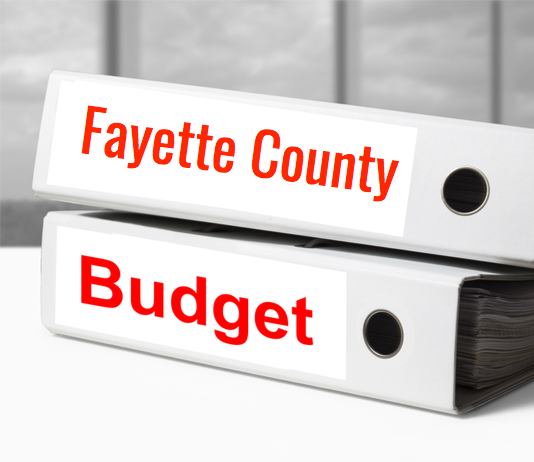 The first of two public hearings on the 2020 Fayette County budget will be held June 13. County Administrator Steve Rapson following the May 30 budget preview responded to questions raised by Commissioner Eric Maxwell about the potential use of reserve funds to offset a tax hike that would come in the absence of a full rollback in the millage rate.

The May 30 budget preview of the 2020 general fund budget showed $55.2 million in general fund revenues. The budget, if adopted as proposed, will be followed by commissioners maintaining the millage rate rather than rolling it back, due to the expense of providing raises for public safety and other employees.

At both the May 30 commission meeting and the retreat earlier this year, and with the exception of Commissioner Eric Maxwell, commissioners agreed with the proposed pay increases.

While he supported the idea of increasing pay, Maxwell at both meetings said could not vote to do so because, when running for election, he promised not to vote for a millage increase.

Asked about the use of current funds held in reserve to help balance the budget and forego a full rollback of property taxes, Rapson provide an explanation of funds that are available, and which could be utilized towards balancing the FY 2020 proposed budget:

“Applying these available funds to balancing the FY 2020 proposed budget would violate the county’s budget principle of no deficit budgeting and using current revenues to fund planned expenditures. Doing so, would create future funding issues and possibly lead to future tax increases. Once one-time revenues are expensed, there is no reoccurring source of funding to apply to reoccurring annual expenditures. In summary, each of these approaches would violate the board’s past directive and would not be considered a best practice,” said Rapson.

“Fayette County’s budget and reserve policies establishes reserve funds of $2 million emergency funding to be used only for natural or man-made disasters and a vehicle equipment fund reserve to maintain normal replacement of county assets. The availability of these funds are considered a best practice and continues the practice of conservative budgeting and the stability of fund balances ensure the county maintains its Aaa credit rating,” said Rapson.

The proposal to provide a needed increase to public safety employees, which totals 40 percent of the county workforce, came at the commission’s retreat in April. After years of full property tax rollbacks, the proposal would mean such a rollback would not occur. An example of the need to address pay came from Sheriff Barry Babb, who said that since Jan. 1 his office currently had 18 deputy vacancies, or 12 percent of his workforce.

“We’re in a bidding war and we’re bleeding,” Babb said at the retreat, noting that local agencies and those statewide and beyond are increasingly raising pay. Citing examples, Babb said Coweta County deputies start at approximately $42,000 and Georgia State Patrol recently increased starting pay to $45,000. The current starting pay for Fayette deputies is $38,609, below the starting pay of both Fayetteville and Peachtree City.

If adopted as proposed, the budget will not require a millage rate increase, but it will negate a full rollback.