During the competition, drivers completed a series of tasks demonstrating their driving skills. There was also a written exam that challenged their knowledge of safety, traffic laws, etc.

With the school year coming to an end, Fayette County’s school bus drivers are making their final routes, but not without being recognized for their hard work and dedication.

More than 60 Fayette County school bus drivers were honored with a special luncheon for their service during the 2018-19 school year.

School bus transportation plays a critical role in students’ education, as bus drivers are responsible for transporting the world’s most precious cargo – children – from the neighborhood to the classroom each day.

Although every Fayette County bus driver is appreciated, the transportation department gave special recognitions to Doris Rockhill, Angela Vernon, and Teresa Williamson who have been driving with Fayette County for 20 years.

Twenty-four school bus drivers were honored for having perfect attendance during the school year; this means they have worked 180 school days.

Special recognitions were also given to 24 bus drivers who were named the 2019 School Bus Driver of the Year. Every school in Fayette County selected a bus driver who goes above and beyond each day to transport and care for hundreds of students. Several assistant principals were in attendance and presented their schools’ bus driver of the year with an honorary plaque.

Applauding drivers for their commitment, Mike Sanders, assistant superintendent of operations for Fayette County Public Schools said, “I have worked with three different school systems and Fayette County really does have the best bus drivers. Your dedication and hard-work does not go unnoticed.”

Congratulations to the following 2019 Fayette County School Bus Drivers of the Year: 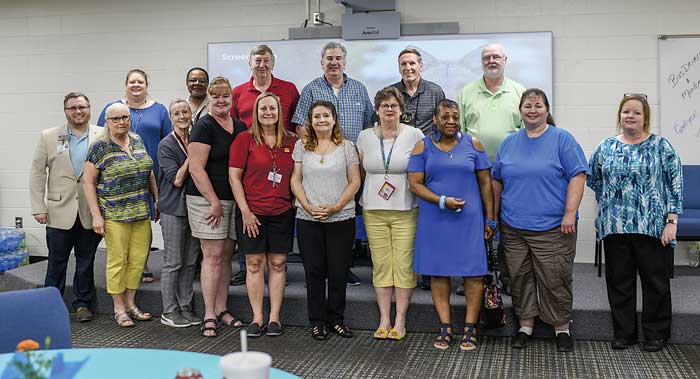