The Peachtree City Council Thursday night will say yes or no to a mini-village proposed for a 28-acre parcel that’s part of 37 scenic acres on the east banks of Lake McIntosh.

“The applicant proposes to develop a 37-acre parcel located on the westernmost portion of the Industrial Park in Peachtree City,” according to the city planning staff report prepared for City Council. “The property is located adjacent to Lake McIntosh, to the north of Falcon Field Airport and is surrounded by the southern half of the Planterra Ridge Golf Course.

“The applicant proposes to build a master planned community consisting of a mix of residential uses, two office buildings, a village green space containing small shops, restaurants and community open space as well as other community amenities such as a chapel, a pool and a gym,” according to the staff information packet.

“The maximum number of dwelling units would be 420 units. To facilitate the proposed development, the applicant requests that 28.04 acres of the property be rezoned from General Industrial (GI) to Limited Use Commercial (LUC) to allow for the mix of residential, restaurant and community amenity uses. The office portion of the development is proposed to remain zoned GI,” the city staff packet says.

The plan will have to overcome objections related to the proximity of a busy regional airport that over a three-day period recently recorded “20 to 50 aircraft landings/takeoffs per day.” Noise and safety issues are almost sure to be raised.

Dating back more than a decade, several unsuccessful attempts by earlier owners have been made to convince the council to change the industrial rezoning next to the airport to a mix of some other uses. The last version in 2012 was called Callula Hills, which sought rezoning to allow 80 homes and an event center. The then-councils always said no.

The current owners contend the site is not marketable for most industrial uses, and would be better suited to a mixed-use approach, an argument that may find more favor with the current council than with those of the past.

Despite city planning staff and the Planning Commission both arguing against the rezoning, the developer says, “The Calistoa Lake McIntosh development all but ensures success landing the next major corporate HQ to Peachtree City.”

“I am an employee that works in Southpark Industrial and I oppose this rezoning.

“Have you been at the four-way stop at Dividend Drive and TDK Boulevard at 5 p.m. any day of the week? We as a company in SouthPark would like to invite you to come and see the congestion for yourself.

“I realize Dan Cathy owns the property and Jason Pace and Bill Lynch are the developers, but they don’t even live in our community. They don’t care about the quality of life of our employees and residents. A typical afternoon commute can take 30-40 minutes just to get out of the city. Drive on Huddleston, Dividend Drive, TDK Blvd and 74/54 between 5-6 p.m.

“There will only be one exit out of Southpark and we need to accommodate another 3,000 cars without any plans on on the road infrastructure. This alone should stop the rezoning.

“Also, have you considered the fact that their are tractor trailers constantly entering Southpark daily? How safe is that for future residents/pedestrians and golf carts.

“The past city mayor and council denied this years ago. Please don’t pass this just because there are some big names involved and many real estate agents looking to cash in. If it doesn’t affect them on a daily basis, their vote should [sic] count.

“We will lose our employees if their commute continues to grow.

“Maybe Dan Cathy can donate the land for green space.”

The City Council meeting begins at 6:30 p.m. at City Hall in Peachtree City. The Citizen will be live-streaming the meeting on The Citizen Facebook page. 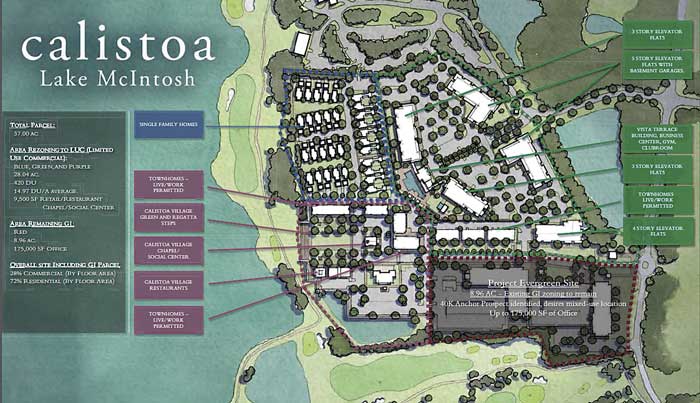