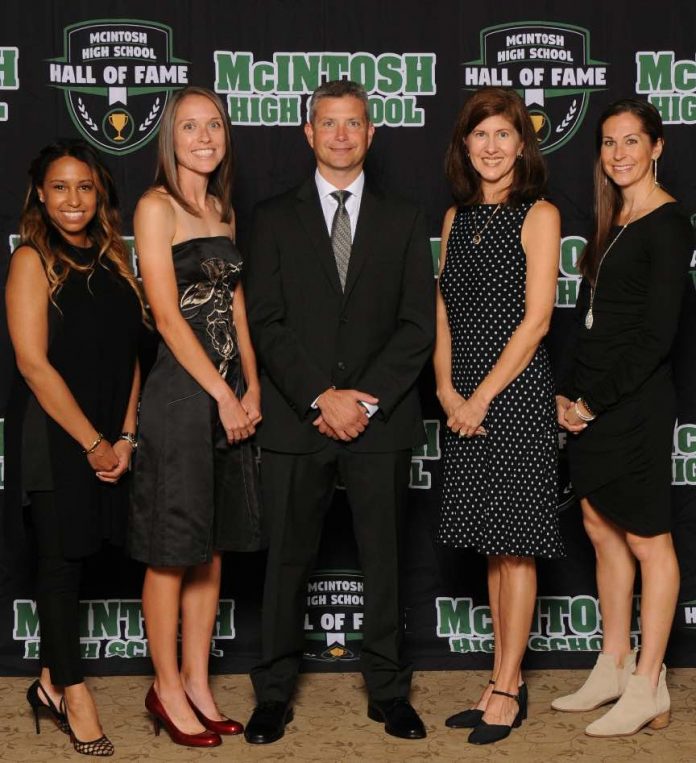 McIntosh High School’s 8th Annual Hall of Fame is in the books but memories of a special night of recognition remain vivid.

Five impressive McIntosh Chiefs, pictured above, along with the 1996 Boys State Championship Cross Country Team, were honored this past October. From left to right, the Class of 2018 inductees are:

Distinguished Alumna Dawn Colbert Burnette, Class of 1986, (Created “Daily Grammar Practice” which is used in middle and high schools in all 50 states and at least 20 foreign countries; Fayette County Teacher of the Year and the county’s first-ever State Finalist; coached Chiefettes to seven State Championships);

The Hall of Fame committee is now preparing to select the next class of inductees to be honored at the 9th Annual Hall of Fame weekend on 18-19 October 2019. Nomination forms for Athletes and Distinguished Alumni are found on the Hall of Fame website: www.mcintoshhalloffame.wixsite.com/chiefs and are accepted year-round.

However, to be considered for the 2019 Hall of Fame class, nominations are due by midnight Monday, April 15. Athlete nominees must have graduated from McIntosh at least ten years ago and Distinguished Alumni nominees must have graduated from McIntosh 20 years ago. Long time faculty members are also eligible to be nominated. Additional details can be found on the Hall of Fame website.