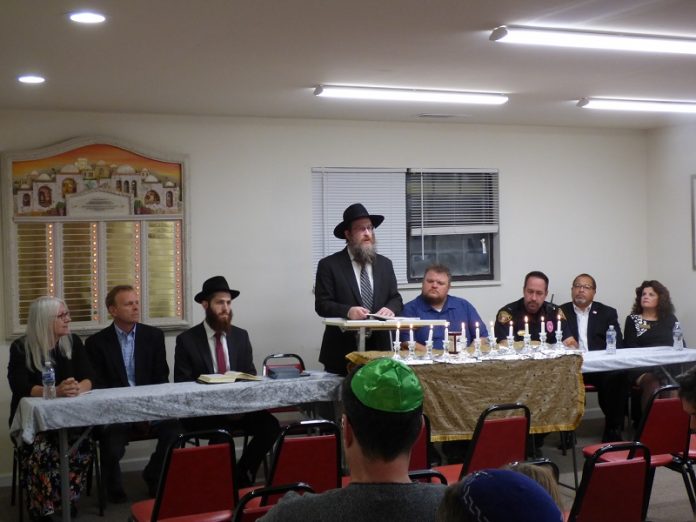 A vigil of inspiration and comfort was held Oct. 30 at Chabad of Peachtree City on Dogwood Trail in Tyrone to commemorate the lives of the 11 people murdered in the Oct. 27 Pittsburgh synagogue shootings.

“We are here, a community of all people, who are gathered for words of comfort,” Chabad of Peachtree City Rabbi Yossi Lew said at the outset of the vigil. “We are here to commemorate the brutal murders of 11 people praying in the synagogue in Pittsburgh.”

Those words were followed by the lighting of 11 candles, in memory of each of the lives lost at the Tree of Life synagogue on Oct. 27.

“We wonder what we can do,” Rabbi Lew said of the reflections of many in the aftermath of the shootings. “We can kindle a light in a place of darkness. Hatred is easy, love is beautiful. We are here for a reason, to do acts of love and kindness. We fight hate with kindness. We fight darkness with light. We will overcome this, we will grow and increase light.”

Among those offering thoughts at the vigil of inspiration and comfort were Tyrone Mayor Eric Dial, Peachtree City Mayor Vanessa Fleisch and Fayetteville Mayor Ed Johnson.

“We hear the word ‘crazed,’ but don’t buy that. It’s evil. We have to call it what it is,” said Mayor Dial. “I want you to know that we are here to be your protector. That’s the role the Tyrone plays for you. A place of worship should not be a place where you don’t feel safe. Our hearts go out to you and to those in Pittsburgh.”

Mayor Johnson in his comments said, “As a pastor, I know how important it is to come together in times like this. It’s difficult to reconcile, that someone comes into a place of worship and massacres people. This gratuitous violence is getting all too frequent. The faith we stand on, is to love our enemy and one another. Fayetteville and the other cities stand with you.”

Citing the tragedy that unfolded in Pittsburg, Mayor Fleisch said she was led to read the words of the Prayer of St. Francis. The prayer was followed by a selection from Anne Frank.

The Oct. 27 mass shooting in Pittsburgh occurred at the Tree of Life synagogue, where 11 worshippers were killed and six injured, including police officers. Robert D. Bowers, 46, faces federal and state charges in the mass shooting.

Bowers committed the deadliest anti-Semitic attack in U.S. history, according to the Anti-Defamation League.