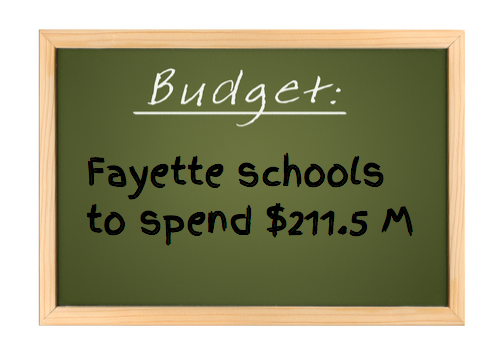 Starting salary plus benefits for each new teacher: $63,220

The Fayette County Board of Education on June 25 will adopt the 2018-2019 budget totaling $211.5 million, the system’s largest-ever budget. The school board will add 31 new teachers, with the idea of helping keep class sizes as small as possible.

The school system had a year-end enrollment of 20,083 students, comparable in size to year-end totals from 2001-2002. The budget that school year 16 years ago was slightly under $136 million.

Assistant Superintendent for Finance Tom Gray said the $211.5 million in revenue includes a projected net increase of 4.9 percent in the tax digest.

The current budget, which expires on June 30, totals $203.67 million, with the new budget representing an increase of $7.798 million.

The proposed increase in expenditures includes items such as 31 full-time equivalent school-level positions, eight classified (such as parapros) positions and a teacher retirement system rate increase of $5.4 million.

A starting teacher receives a salary of $40,358, along with $22,862 in benefits, for a total budget impact of $63,220. Pertaining to benefits, the primary costs are health insurance at $11,340 and payments into the teacher retirement system of 20.9 percent.

Similarly, a teacher with eight years experience receives a total compensation of $84,250. That breakdown includes a salary of $56,717 and benefits totaling $27,533.

One of the reasons often cited by school board members and the administration for increasing the number of teachers deals with keeping student-teacher ratios as low as possible.

The budget proposal includes $212.4 million in expenditures, with direct instruction accounting for 67.2 percent of total expenditures.

The budget again next year maintains a reserve amount totaling 10 percent of revenues, or $22,841,858.

The school board is expected to adopt the budget on June 25. A public hearing on the budget will be held at the June 11 work session at the central office location on Stonewall Avenue in Fayetteville.

The May 29 public hearing came with no one from the community speaking. At the time of public comments, there were less than two dozen people in the meeting room, of which nearly all were school system employees or affiliates.