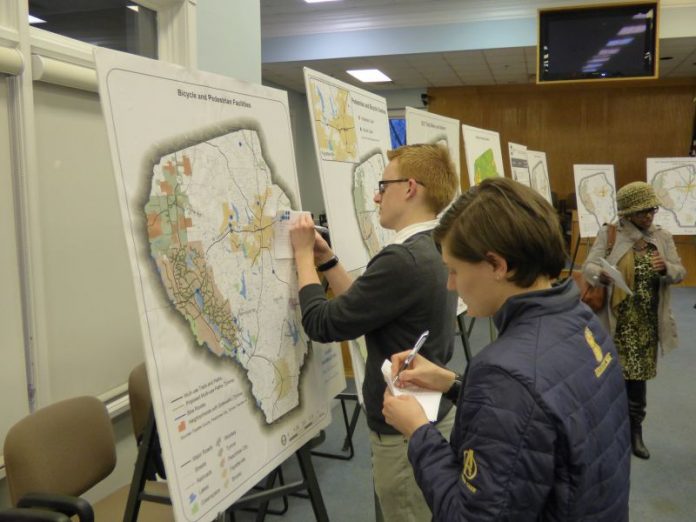 Fayette County is updating the Fayette Transportation Plan, establishing a Master Path Plan for the county and conducting a transportation study on Ga. Highway 74. To that end, an open house for citizen input was held March 1 in Fayetteville. Another open house will be held March 6 at Sandy Creek High School.

Held at the county offices, and even though transportation issues historically gain much public attention and comment, it was noteworthy that that less than 50 people out of Fayette’s population of more than 110,000 attended. Additionally, a significant number of those attending were county and municipal staff and elected officials.

A portion of the open house, complete with numerous charts and maps, dealt with a master path plan for Fayette County. Citizens attending the meeting were asked to comment on the many issues related to a path plan.

Residents put numbered dots on locations on the multiple maps for which they wanted to share information and opinions related to county paths and connectivity.

Similarly, another portion of the displays dealt with the vision for Hwy. 74, which extends from Interstate 85 in Fairburn, through Tyrone and Peachtree City.

Participants were asked to apply dots to the component areas with which they agreed. Categories, each with two or three sections, dealt with access management, accessibility and connectivity, maintaining and improving corridor aesthetics, seeking opportunities to encourage and facilitate alternative travel modes, land use and development patterns and mobility.

Another transportation plan open house will be held March 6 from 5-7 p.m. at Sandy Creek High School on Jenkins Road.

After the open house meetings, the county transportation committee will provide input to the consulting team to tally the public input and develop a plan to be presented to the county and municipalities for consideration later this year.