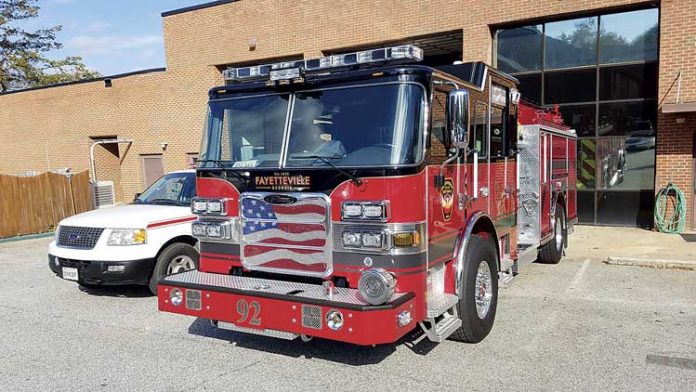 The Fayetteville Fire Department’s new Pierce Arrow XT pumper truck arrived on Nov. 14. It is one of three new trucks to be integrated into the city’s fleet.

City spokesman Danny Harrison said the truck arrived on Nov. 14, and after giving it a thorough investigation, firefighters say they look forward to putting the truck in service soon.

“This brand-new Pierce Arrow XT model is one of three new trucks the fire department plans to integrate into its fleet within the next year or so,” Harrison said. ”The new models are slightly more compact than the current fleet. The total truck length is three feet shorter and the wheelbase is 40 inches shorter than the current units. Coupled with an independent front suspension, the new models will be much more maneuverable, which is important to Fayetteville Fire Chief Alan Jones.”

Commenting on the new arrival, Jones said, “It was critical that we adjust our specifications to ensure we could navigate some of the tighter spaces we are facing with several new projects in the city. The new trucks will also help us in some of our older neighborhoods with narrow streets, which predate our current street standards.”

Harrison noted that, while more compact, the new truck still delivers full performance. A 13-liter inline-6 diesel engine and a bank of six 950-cold cranking amp batteries keep this truck and its 750-gallon water tank ready to respond. The pump is capable of pumping 1,500 gallons of water per minute, he said.

Matthews said this will be the first pumper in the fleet, and only the second overall, to have air bags in the cab.

A first-ever feature for the city’s fire truck fleet is the new truck’s Vehicle Information Center, a dash-mounted touchscreen interface that helps monitor all of the major systems and acts as a monitor for the forward and aft video cameras, said Harrison.

“When the driver indicates to turn left or right, the appropriate camera image will appear on the screen,” Matthews said. “It’s another safety feature we’re looking forward to testing.”

Jones said the new truck that was just delivered is a new impact fee project that is connected with Station 93.

“The two other trucks that we are about to order are replacements for Engines 91 and 92 which are both 2004 American LaFrance pumpers,” said Jones. “These are SPLOST (special purpose local option sales tax) funded projects.”