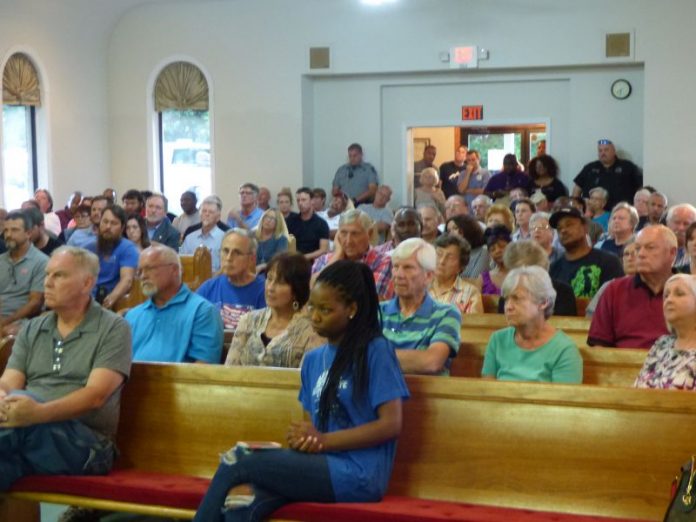 Nearly 150 people attended the Sept. 7 meeting of the Tyrone Town Council to discuss the mural noting some of the town’s history. Photo/Ben Nelms.

Nearly 150 people attended the Sept. 7 meeting of the Tyrone Town Council where the now-controversial mural positioned behind the dais  was the topic of discussion by the council and more than 30 people speaking in public comments.

Speakers on both sides of the issue pertaining to the continued existence of the mural had their say, with some clearly wanting the mural to remain and other wanting it removed. Still others offered alternative suggestions, such as relocating it to another area in the town.

A motion to keep the mural where it is for the time being, was followed by a 3-1 vote, with council members Linda Howard, Gloria Furr and Ken Matthews voting in favor and council member Ryan Housley opposed. Mayor Eric Dial votes only as a tie-breaker.

Housley prior to the vote suggested a committee be formed and a dialogue among the community created to determine a roadmap for going forward with the fate of the mural.

The mural depicting the history of Tyrone has stood for nearly 21 years behind the dais in the Town Council chambers.

The mural was recently covered by a large curtain after state Rep. Derrick Jackson and others at the Aug. 17 Town Council meeting suggested that the mural does not reflect the Tyrone of today.

The mural was uncovered for the meeting given that it was the topic of a portion of the Sept. 7 meeting.

Check back with The Citizen for additional coverage from the meeting.