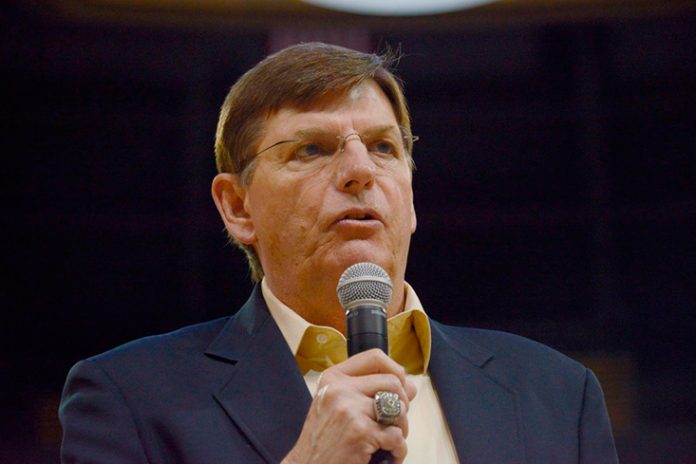 Former longtime Fayette County High Principal Gary Phillips has been forced out as executive director of the Georgia High School Association, the organization that makes and enforces the rules for high school sports and other academic competitions throughout the state.

The official action was confirmed Monday morning during a special called meeting of the organization’s executive committee in Thomaston, after the board of trustees recommend the move in a Feb. 27 meeting.

It was revealed by the GHSA last week that the trustees discussed “recent legislation that could affect the future of the GHSA” and the sponsors of the bills in question offered to withdraw the legislation if Phillips resigned. Phillips then advised the trustees that, “for the good of the GHSA and the schools it represented,” he would retire at the end of the current school year to stop the legislation if the GHSA agreed to honor the financial terms of his contract through the 2017-2018 school year. A motion was made to accept Phillips’ offer and it passed with a 5-3 vote.

The GHSA, which does not answer directly to any branch of state government, oversees competition involving more than 400 high schools throughout the state and some 175,000 students.

There have been numerous controversies involving the GHSA over the past 15 years and legislation suggested to fix them. In many cases the legislators who introduced the bills in question represented school districts affected negatively by certain GHSA decisions involving such matters as the reclassification process, the enrollment multiplier for private schools, stadium size for football playoff games, and most recently the right to wear religious symbols on clothing during competition.

One of the sponsors of the current legislation is from Cartersville, whose high school has been at odds with the GHSA in several matters recently such as reclassification, game receipts and baseball playoff scheduling, according to an Atlanta Journal Constitution report.

Another sponsor is from Calhoun, and it has been suggested in the media and among fans across the state that the proposed legislation is in response to a variety of complaints from specific school districts these legislators represent.

The bills would essentially dissolve the GHSA and put the new operation under the direction of the Georgia Department of Education.

Phllips became the GHSA’s executive director July 1, 2014. He joined the organization in 2001 after his retirement from public education, which included a stint as principal of Fayette County High School from 1986 to 2001 after two years as an assistant principal. He worked at four other schools during his career, but FCHS was also his first job as a teacher right out of college in 1968, when it was the county’s only high school.

His most notable stint as a coach came at Johnson County High in Wrightsville, where he won a state championship in football and two state titles in track. His tailback on that winning football team, also one of his sprinters on the track team, was Herschel Walker, who went on to the heights of Bulldog fame at the University of Georgia.