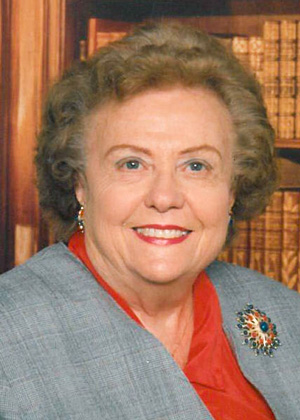 Ora Jean Porter Gunnin, 91, of Fayetteville and East Point, passed away peacefully on February 13, 2017 at Christian City, surrounded by family and friends.

She was born August 18, 1925 to Arthur Newton Porter, Sr. and Ora Bell Wood Porter in Statham, Ga. She was the last survivor of seven daughters and two sons of the Porter family and the last aunt of the Gunnin family of eleven children. She was raised in East Point where she lived for over 70 years.

Ora Jean was outgoing and vivacious, was very active in church and community affairs, and was happiest when she was doing for others.  As a child, she attended East Point Christian Church, and later was a charter member of Westside Christian Church and an active member of First Christian Church of Tyrone for years. She was PTA president of Parklane Elementary and Russell High School, was active in Russell High Booster Club and organized the last reunion of all the classes at Russell High. Ora Jean was Mrs. East Point for all her civic contributions to the city.  She was co-founder of East Point Historical Society and worked there with her husband for years. President of East Point Women’s Club, active in Fulton and Fayette County Republican Party and American Legion Women’s Auxiliary, state officer of Republican Women’s Club, National officer of Travelers Protective Association (TPA), and served on the Fulton County School Board.

She was preceded in death by C. Olen Gunnin, her husband of 72 years.

The family also wishes to acknowledge her caregivers, Callie and David Simmons, Annie Hopkins and all the staff at Christian City for their outstanding care and dedication.

Those who wish may make donations to Christian City Children’s Village – www.christiancity.org/children, or Southwest Christian Care at www.swchristiancare.org.  or East Point Historical Society at www.eastpoinths.org.