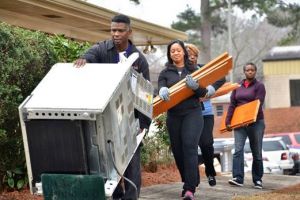 For many Georgia Power employees, the federal holiday to honor the work of Dr. Martin Luther King, Jr. is “A Day On, Not a Day Off.”

According to volunteer team leader and Atlanta native David Herring, the program is facilitated through the Citizens of Georgia Power group, which encourages employees to sign up to volunteer in the community throughout the year.

“We have ten different projects going on throughout the Metro South Region today,” Herring said.

Christian City President and CEO Len Romano welcomed the volunteers and expressed his gratitude for their choice to celebrate the legacy of Dr. King by serving at Christian City.

“Dr. King made a difference not just in the United States, but around the world,” Romano said. “Through your volunteer service at Christian City, you are helping us provide life-changing hope for the victims of child abuse and the hundreds of senior adults who live on our campus.”

According to Connie Hall, Christian City’s volunteer coordinator, this is the twelfth year that a group from Georgia Power has volunteered on the Christian City campus. “You are our life savers,” she said in welcoming the employees.

The volunteers divided into three groups to assist with playground landscaping at the Children’s Village, finishing a shed in the community garden, and taking inventory at a storage facility on the Christian City campus. Several employees brought their children along for hands-on learning about the importance of serving in the community.