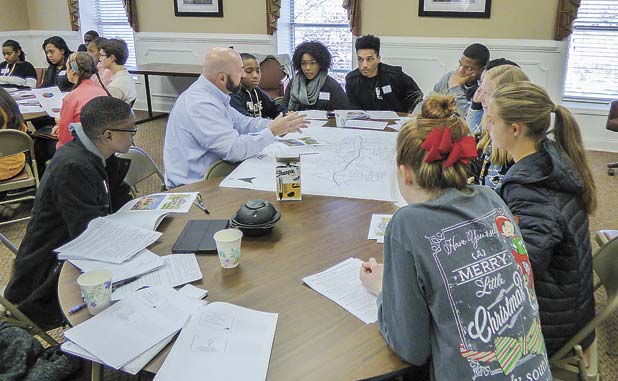 Dozens of AVPRIDE teens get in-person briefings on how local government works
A group of nearly 50 teens got an up-close look at how local government functions during a Dec. 10 meeting at the old courthouse in Fayetteville. Sponsored by AVPRIDE, the students met with local government administrators to learn how and why local government operates.
The teens heard specifics on local government from Fayette County Administrator Steve Rapson, Fayetteville City Manager Ray Gibson, Tyrone Town Manager Kyle Hood and Peachtree City Manager Jon Rorie.
After initial presentations, each of the four administrators sat with the a group of teens, then rotated to each of the four tables. The kids received a wealth of data and statistics, a primer on how services are provided and how and why taxes are levied.
The teens also got a glimpse of what the future might hold. Local governments are currently working on their respective 20-year comprehensive plans which will determine what each area of the county will look like over the next two decades. 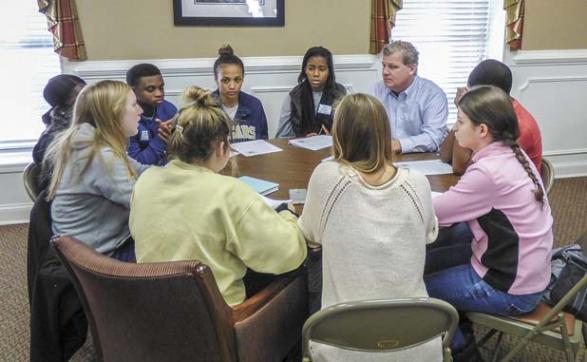 Enjoying the meeting as much of the kids, administrators encouraged questions from the young participants and challenged them to learn that nothing is for free, to understand what it takes to reach agreement in a community and to let their voices be heard, regardless their age.
Fayette County Development Authority (FCDA) Vice President of Economic Development Emily Poole spoke on the connectivity between economic development and civic engagement, the relevance of young people to the development process and the job outlook in Fayette County with the continued expansion of healthcare and the rapid development of Pinewood Atlanta Studios, now with nearly 1 million sq. ft. of space, and growing, in west Fayetteville.
Fayette Visioning Initiative treasurer and former school board candidate Ogechi Oparah during the meeting spoke about civic engagement, reiterating the importance of becoming involved in the community, attending public meetings, voting, working together for the betterment of the community and being aware of individual rights.
A small group of teens after the meeting shared their thoughts on what they had seen and heard.
Seventeen-year-old Fayetteville resident Cole Neely said the meeting was very informative.
“It could change Fayette County for the better,” he said.
Jaila Lewis, a 17-year-old from Tyrone, agreed that the information presented by local government administrators was informative.
“We should have it again, but with more ages groups to see all sides,” Lewis said of the need to gain additional perspective across the age spectrum.
“I thought it was great that the county leaders were trying to engage us, even though millennials are leaving,” said 17-year-old Peachtree City resident Dunnchadn Strnad.
Fifteen-year-old Fayetteville resident Kelly Padilla echoed the idea of having similar meetings with a variety of age groups represented. Padilla said she found Oparah’s call to address issues in the community to be inspirational.
By the end of the meeting, the teens likely left the meeting with more information on the workings of local government than some of their adult counterparts.