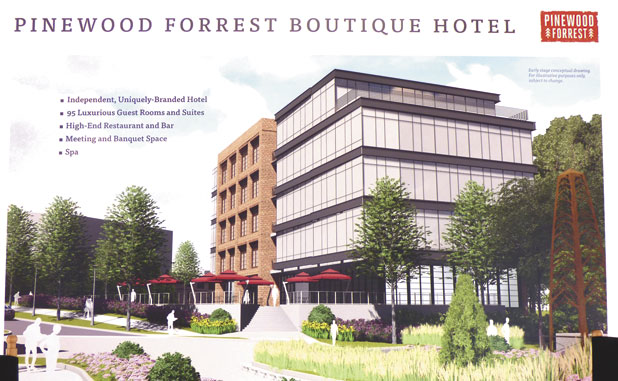 It has been clear for some time that the large Pinewood Forrest development across from Pinewood Atlanta Studios in west Fayetteville will be something different. The beginnings of that difference was unveiled on Oct. 14.

One of the first to be constructed will be a 95-room boutique hotel developed by HCH Pinewood Forrest, LLC and operated by Hay Creek Hotels. The hotel is expected to open in 2018.

On the residential front, the first phase of homesites will activate the beginnings of the Garden and Culinary districts. The first homesites will be available for reservation in the coming months.

“We expect the initial group of homesites to sell quickly based on interest we’ve already seen and the excitement already created at Pinewood Forrest,” said Lynch.

“The talented, carefully selected team of homebuilders we’re assembling furthers our belief that Pinewood Forrest will set a new bar for residential developments in mixed-use projects,” said Lynch. “We are confident this group will deliver quality residences that follow the architectural standards set for Pinewood Forrest, including a green building certification program that will exceed typical certification program requirements by approximately 50 percent.”

An expanded version of this story will be included in the Oct. 19 edition of The Citizen.