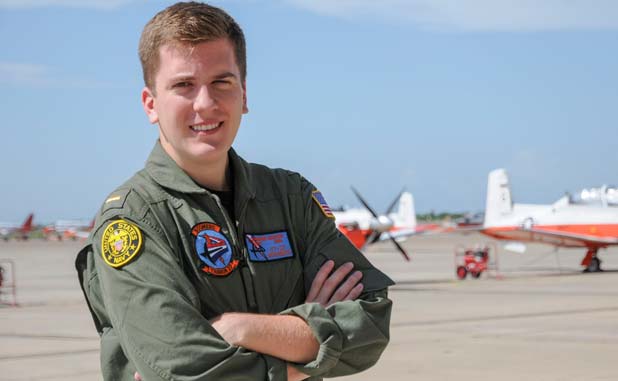 Ensign Spencer Marion is a student pilot with the “Rangers” Training Squadron (VT-27), based in Corpus, Christi, Texas, that operates the T-6B Texan II aircraft. As a student, Marion is responsible for learning how to become proficient in operating aircraft and preparing to be ready to carry out the Navy’s mission.

“I enjoy having my office in the sky and the view that comes with it,” said Marion. “My hometown is full of pilots, so I am following a legacy of great leaders from my community which in return, gives me a tremendous sense of pride to carry on this legacy.”

The T-6B Texan is a training aircraft that is powered by a 1,100 shaft horsepower, free-turbine, turboprop single-engine, four-bladed propeller, with a cruising speed of 310 mph.

After graduation, pilots continue their training to learn how to fly a specific aircraft, such as the Navy’s F/A-18 Hornet strike fighter jet, the P-8 Poseidon maritime patrol aircraft or the SH-60 Seahawk helicopter. They are later assigned to a ship or land-based squadron.

Many of these pilots will fly aircraft which take off from and land aboard aircraft carriers and other aviation and air-capable ships, a unique capability which allows Naval Air Forces to operate integrally with surface forces anywhere on the world’s oceans. Recently, Navy strike aircraft operating from aircraft carriers sailing in the Eastern Mediterranean Sea and from Middle East waters have launched hundreds of missions against terrorist targets in Iraq and Syria.

As a member of one of the U.S. Navy’s squadrons with the newest aircraft platforms, Marion said he and other VT-27 sailors are proud to be part of a warfighting team that readily defends America at all times.

“The legacy of this command is great, there are a lot of great aviators that have come from this command,” said Marion. “It’s both inspiring and motivating knowing that the best of the best have walked through these doors.”

Jobs are highly varied at VT-27, according to Navy officials. About 60 men and women officers and 15 civilian employees, make up and keep all parts of the squadron running smoothly; this includes everything from training the new aviators, maintaining airframes and engines, processing paperwork, along with handling and flying the aircraft.

“What the men and women of this squadron accomplish every day is nothing short of miraculous,” explained CDR Corbett Dixon, Commanding Officer of VT-27. “The students are in the process of moving from just another college graduate in society, to someone who sacrifices their own time and effort for society. That’s what it means to serve in the Navy. That’s what they’re learning as they learn to fly. And the staff here, the instructor pilots and civilians, put in an amazing amount of effort day in and day out, to ensure that we send the best young men and women forward to serve our nation, with all the skills, dedication and integrity necessary to serve successfully.”

Serving in the Navy, Marion is learning about being a more responsible leader, Sailor and person through handling numerous responsibilities.