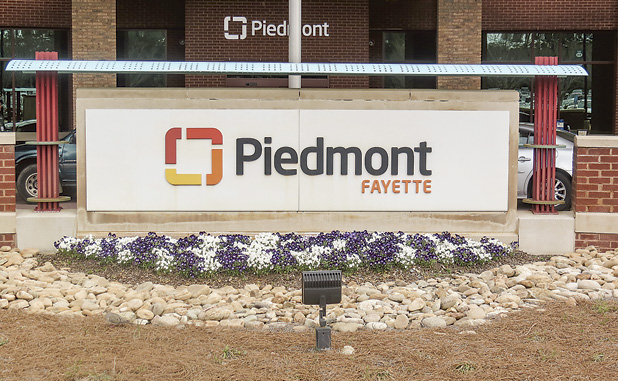 The contract between Piedmont Healthcare and insurer United HealthCare expired on June 30. Left in the lurch with no current in-network coverage in Fayette and Coweta counties are the many hundreds of United customers who use Piedmont Fayette or Piedmont Newnan hospitals.
Piedmont has a big presence in Fayette and Coweta, as does United, with many employees of Delta Air Lines and the school system counted as its customers. Those customers today can access the Piedmont hospitals, but only as part of out-of-network coverage from United.
Representatives from both Piedmont and United addressed the contract issue.
“No one has walked away from the table. But when you spend more time going backwards there’s not a great deal of optimism in terms of someone who wants to reach a deal,” said Piedmont Healthcare Chief Consumer Officer Matt Gove.
Gove said that going so long without progress in reaching an agreement calls into question the idea of having a future with United.
As for any negotiations or meetings scheduled between the parties in the near-term, Gove said contract talks occur in other ways.
“A lot of this happens, not through meetings, but through documents and emails sent between the parties,” Gove said. “Some communications are happening, but that’s not negotiation because we’re not getting any closer to an agreement.”
Scott on July 28 gave his position on an eventual resolution.
“Our goal has always been to renew our relationship with Piedmont, and our team has been working hard to continually present new ideas to Piedmont and find a mutually agreeable solution. We have sent multiple proposals to Piedmont since July 1,” he said. “But the health system’s engagement has been much slower than expected and continues to emphasize a resistance to change and long-term rate increases rather than the patients’ best interests.”
Gove maintained that United in its position is moving further away from an agreement between the parties.
From United’s perspective, the CEO representing Georgia, Garland Scott, said, “Over the last several months, Piedmont has made very few changes to its original contract demands, making it difficult to reach a compromise on a new agreement. We offered them fair and competitive rate increases that would ensure their hospitals and physicians are paid appropriately for the important services they provide, but the health system wants to raise costs by nearly 30 percent at its hospitals over the next three years. Piedmont is also resistant to a performance-based payment model, which places greater focus on quality, enhanced care coordination, and a better patient experience.”
Scott called Piedmont’s “rate demands … simply unfair and unsustainable for Georgia consumers.”
From Piedmont’s perspective, “The 30 percent they stated is not true. We’re not going to negotiate rates or contract terms in the media. It’s an excellent talking point but, unfortunately, it’s not true,” Gove said.
Gove said Piedmont asked for a rate increase that helps keep up with healthcare cost inflation.
“Rates aren’t the defining aspect of the contract,” Gove noted, adding that a contract includes multiple components and is centered on the ability to provide care to patients and is not only about rates. “We want to reach a solution, whatever form that takes. Piedmont can’t agree to anything that places United shareholders above the needs of patients.”