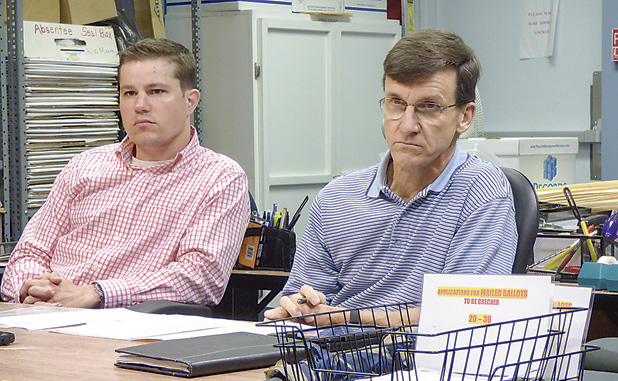 A June 14 called meeting by the Fayette County Board of Elections resulted in the termination of Election’s Supervisor Tom Sawyer who held the position for the past 10 years.

The meeting was attended by elections board members Darryl Hicks, Addison Lester and Aaron Wright. The purpose of the meeting was to “consider the performance of the duties and responsibilities of the Elections Supervisor in support of the Board of Elections, specifically as it relates to the input of the payroll information for the most recent pay period.”

A motion was made after the board returned from executive session. The motion, to terminate Sawyer immediately, came with a 2-0 vote. Hicks did not take part in the vote, or in the deliberation, because he was the “fact witness” in the hearing.

County attorney Dennis Davenport at the outset of the hearing outlined how the hearing should be conducted and noted that a “fact witness” presents information pertaining to the case but does not participate in the deliberation and does not vote on the matter. At that point, Hicks recused himself.

Per Davenport’s direction, the hearing was held in open session.

“This is not personal about Tom. This is about the job and the responsibilities required in this job and whether or not it is my opinion that Tom can perform those duties of the job based on historical information that causes me to think otherwise,” Hicks said.

Historically, said Hicks, the board has had a challenge in getting Sawyer to fulfill the basic responsibilities of his supervisory role. Hicks cited issues such as consistently providing meeting minutes within 10 days of a board meeting, consistently providing the agenda within seven business days of meetings, updating the election’s website and a lack of requested cross-training. More recently, said Hicks, Sawyer had not kept him (as chairman) and board members informed about what was going on.

Hicks noted that Sawyer had recently been out due to health issues, something Sawyer later related at some length in his comments later. He was both hospitalized and required rehabilitation before being released from his doctor to return to work.

Hicks said Sawyer did not communicate consistently with him or the county administrator concerning his return to work.

Hicks also noted other priorities such as the timely billing the municipalities for the election.

Hicks said the elections board subsequently met with Sawyer and issued a 90-day performance improvement plan asking him to fulfill his job duties. The board met with Sawyer again 30 days later to review the plan.

“Tom had done only a couple of those items we listed,” said Hicks.

Then on May 31, Hicks said he received a call stating that Sawyer had not entered his department’s payroll information. Hicks said he called Sawyer and was informed that Sawyer was meeting with county IT staff about updating the website. Hicks said he told Sawyer the payroll was the priority.

“I believe Tom doesn’t like the supervison that this board is required to give him,” said Hicks, adding that citizens are calling the board about things that have not been done. “… I think it is now time that this board decide whether or not this is the kind of leadership you want in the elections department and whether this is a fair representation of what the county should expect and what the employees should expect.”

Hicks added the belief that there might be an erosion of respect for Sawyer by department employees.

The board then asked Sawyer for his input. Sawyer noted his beginning employment with the county in 2003 in the budget office, followed by his appointment as elections supervisor.

“I never had any problem with anybody doing anything. The biggest problem we had was board members not coming to meetings,” Sawyer said. “Everything went fine through this year. I’m very sorry that I had a stroke in March that debilitated me and I was put into the hospital and went into rehab following that. And I didn’t know until the week before I came back that I was even going to be eligible to come back.”

Sawyer said he was told to return to the doctor to obtain further clarification on returning to work.

Sawyer referenced the ongoing issues in the office, such as the preparation of sample ballots for the May election and completing the redistricting work.

“I didn’t think it was my place when I was out sick that I should try to second-guess what was going on in this office. Maybe that’s what you think I should have done. I was in the hospital and in rehab at the time,” said Sawyer. “When I came back there were problems and we worked them the best we could.”

Pertaining to the recent payroll issue cited by Hicks, Sawyer said, “Just so you know, the Friday before we were trying to certify the election. That was the (occasion) of the called meeting of the elections board. And we stayed here until after 8 p.m. to get those run through the system.”

Addressing another deadline, Sawyer said the payroll was due at the same time the certified election results had to be in Griffin to be picked up by state elections staff.

“The payroll was submitted to (Human Resources) on Friday before we left,” Sawyer said, adding that he was not able to get into the password protected system and that his password had to be changed. He subsequently instructed a department employee to approve the payroll that had already been completed.

Sawyer near the end of his comments said he was not aware of any problems with department employees.

Sawyer also noted that there was significant confusion with the redistricting process, adding that he did not believe there was anything he could have done to mitigate that confusion. He said those issues might not have occurred if one of board members had provided some assistance with the matter.

Sawyer said he did not know until one week before his return that he would be able to come back to work.

Hicks in his response noted that there was no issue with Sawyer being out for medical reasons.

“My whole premise was, communicate with me,” said Hicks. “Everything I’d heard was that Tom was talking to staff. So I didn’t see a need for one of us to come in here and sort of override his conversations with staff and give them direction. This was never about the stroke. It was about the ability to delegate, the ability to prioritize and the ability to multi-task, which is what supervisors are required to do.”

Sawyer responded, saying the weekend after the Presidential Preference Primary is when he had a stroke and was hospitalized.

“I apologize. I hate that I wasn’t here,’ Sawyer said. “This whole deal of redistricting, using the Secretary of State’s software, we’ve only done that one time in this office, in 2014. I do apologize, but I don’t remember you (Hicks) coming into this office except coming in for an election.”

“When I became chair, I felt it to be critically important that I come in and interact with staff and try to make sure staff have what they need,” Hicks said. “I don’t think that as a board member I should override what the chairman’s responsibility is and micro-manage.”

Sawyer turning to another issue said Hicks has made comments that staff “has lost their effectiveness dealing with me. All I have to ask is how does he know that, how do any one of you (Wright and Lester) know that. I’m not being critical, I’m just saying that the only time I’ve seen him in here is for a board meeting. I think he came in one day last week.”

Hicks responded, saying staff has more than one way of communicating rather than in person.

Lester spoke, telling Sawyer that the board has has issues over the years with things such as timeliness, prioritizing, agendas and meeting minutes.

“I’d like you to come up here and see what goes on in this office,” Sawyer said.

With that comment the open session was closed and Lester and Wright went into executive session. They returned after approximately 30 minutes to open the session. The motion was made to terminate Sawyer’s employment immediately. Both Wright and Lester voted to terminate.

Hicks after the meeting told election staff that the board did not make the decision lightly. Going forward, said Hicks, the election’s board will look for interim help for staff while posting the position and initiating the interview process.