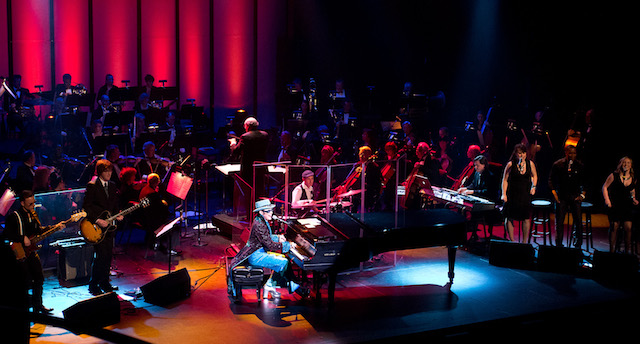 Remember When Rock Was Young is a tribute show that celebrates decades of chart-topping songs featuring renowned artist Craig A. Meyer .

Craig will be teaming up June 18 with 28-piece Atlanta Pops Orchestra to perform an evening of Elton John hits at The Fred. The show is the second of four concerts offered in the Tribute Series this summer.

Meyer has toured internationally and recorded with music legends Barry Manilow and Frankie Valli, and has headlined for Princess Cruises, Royal Caribbean Cruise Line, Celebrity Cruises and Regent Cruises around the world.

Today, he is considered to be the best Elton John tribute artist in the market, whose strong vocals, striking resemblance and amazing talent on the piano has audiences everywhere remembering when rock was young.

This spectacular musical journey celebrates the decades of chart topping hits by Sir Elton John, including: “Benny and the Jets”, “Philadelphia Freedom”, “Crocodile Rock,” “Goodbye Yellow Brick Road” and “Candle in the Wind.”

A celebration of the character, costumes and charisma of the famed pianist and singer, Meyer’s fully produced show has captivated audiences throughout the United States and abroad.

Gates will open at 7 p.m., with opening act James Casto taking the stage at 7:15. Remember When Rock Was Young will begin at 8 p.m.  Reserved, lawn and picnic table seats may be purchased by visiting the Fred Box Office or at www.ticketalternative.com.  For further information, call 770-631-0630.