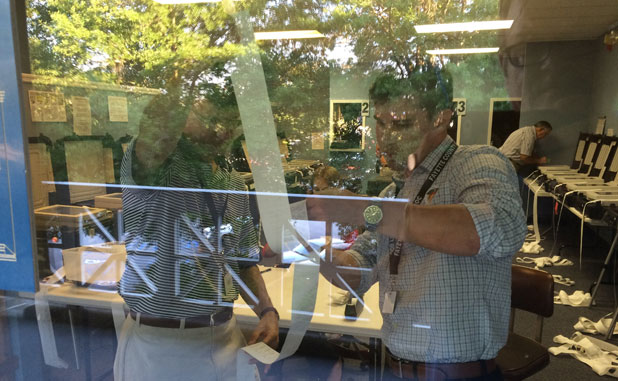 In Fayette-only Republican races, incumbent Fayette County Commission Chairman Charles Oddo out-distanced four other challengers — including two former mayors and a former commissioner — to win the Republican Primary at-large seat without a runoff. Oddo has no Democrat opponent in the fall election.

Incumbent Commissioner Randy Ognio squeezed by his District 2 challenger, former Commissioner Lee Hearn of Brooks, by 28 votes out of 3,886 cast. A recount may be in store for that race.

Incumbent Board of Education Chair Marion Key lost her race to Scott Hollowell by 75 votes in District 3. Hollowell will face Democrat A.K Stowman in November.

In the multi-county district attorney’s contest, Assistant District Attorney Ben Coker of Upson County got 11,389 votes (46.7%) across the Griffin Judicial Circuit. Tyrone attorney Rudjard Hayes polled 6,809, carrying Fayette but getting blown out in Spalding, Pike and Upson. Fayette attorney Cindy Manning got 6,150 to come in third. Coker and Hayes will meet in the GOP runoff.

In the two contested nonpartisan superior court judges races, one incumbent won and one lost. Judge Mack Crawford turned back Fayette attorney Catherine Sanderson’s bid to unseat a sitting judge 20,140 votes (65%) to 11,047 (35%). District Attorney Scott Ballard gave up a safe reelection bid to run against a veteran sitting judge, Tommy Hankinson of Upson County. Ballard, a Fayette native,lost in the other three counties of the circuit but won big in Fayette, beating Hankinson 17,527 (55%) to 14,171 (45%). Ballard’s margin of victory came in vote-rich Fayette.

The race to succeed retiring Republican U.S. Rep. Lynn Westmoreland will be decided in a runoff between dentist Drew Ferguson, the former mayor of West Point, and Coweta State Senator Mike Crane. The two were locked in a virtual tie Tuesday night at 27% each in balloting across 192 precincts that saw 57,099 votes cast for a field of seven candidates. Crane led Ferguson 15,343 votes to 15,277, a difference of 66 votes. Fayette Countian Jim Pace came in third with 13,198 votes (23%).

UPDATED 9:40 p.m. — 3rd District U.S. House race, with three of 13 counties reporting, Ferguson leads with 27%, while Crane and Pace are knotted at 24% each. Nearly 34,000 votes tallied in that race so far, with dentist and former West Point Mayor Ferguson at 9,229 votes ahead of Pace and Crane by about 900 votes each.

UPDATED 9:20 p.m. — Vote count in Fayette seems to have slowed. GOP HQ talk was there was a glitch with state reporting site, John Thompson reports.

UPDATED 7:47 p.m. — No totals yet, but John Thompson reports from the nine tapes posted, Babb is winning “in a rout,” “looks like Oddo wins, Hearn–Ognio in a dogfight, Maxwell slight edge.”

UPDATED 7:38 p.m. — Early vote totals will be added in at the end of precinct tallies, John Thompson reports. Turnout for early voting very light: 5,200 out of 69,000 registered in Fayette.

ALL PRECINCTS COUNTED INCLUDING EARLY VOTING

Below, Precinct 24 comes in. Photo/John Thompson.