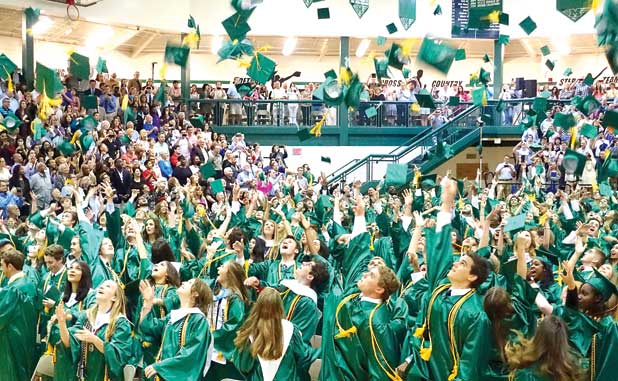 The threat of inclement weather on May 20 caused graduation plans for Fayette County high schools to be altered, with ceremonies held indoors. The events proceeded smoothly despite the change of venue.

Each of the high schools, with the exception of Sandy Creek, moved their graduation ceremonies inside the schools’ facilities. Sandy Creek held its ceremonies out of county at a church in Austell.

School system spokesperson Melinda Berry-Dreisbach said the graduation ceremonies went smoothly despite the decision just hours before the events to hold graduation inside due to the stormy weather forecast for the evening hours.

“Everything went well,” Berry-Dreisbach said. “The schools had to take precautions. It’s better to err on the side of caution.”

Little to no rain fell in Fayette during graduation times, though the National Weather Service continued to forecast precipitation all afternoon and evening.

Sandy Creek High School was the only school to hold graduation ceremonies in a location other than the school. Principal Robert Hunter said he was contacted by parents who did not want the limited space afforded by the school’s gym. After searching in vain for suitable venues locally, Hunter found a large church in Austell that could accommodate the the large number of people expected.