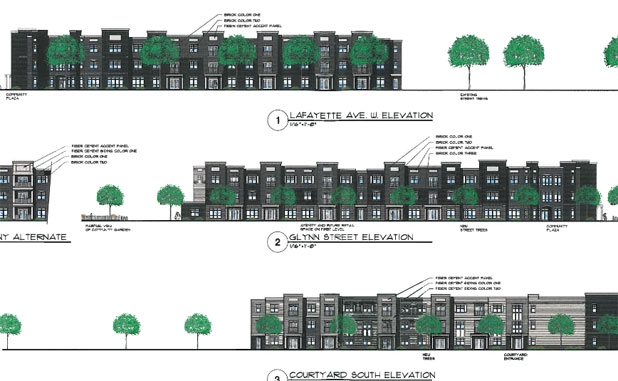 The controversial proposed apartment complex on the border of Fayetteville’s downtown gets its first public hearing Thursday night. Earlier this month, the City Council shifted the meeting times for all future council meetings to 6 p.m., so residents should plan for an early evening.

The proposal by Rea Ventures Group would establish a three-story building called Abbington Square to house 60 apartments along with limited retail on the first floor facing North Glynn Street. The property is situated on 4.6 acres downtown, between Lafayette Avenue to the south, the 100-block of North Glynn Street to the east and a short distance from Lanier Avenue to the north.

The layout calls for 1-bedroom/1-bath units at 750 sq. ft., 2-bedroom/2-bath units at 1,055 sq. ft and 3-bedroom-2-bath units at 1,225 sq. ft. Plans call for 93 percent of the apartments to be one or two bedroom units. Rents will run from $640 per month to $1,200 per month. Amenties would include an art/studio space, business center, fitness center, a community garden, Energy Star appliances and washer-dryer hookups.

Access to the development would be by way of Lafayette Avenue only, according to city planning staff.

The proposal has come under fire because of its desire to provide affordable housing in Fayetteville through the use of federal tax credits.

Income requirements call for income levels to be between $35,000-58,000. Other requirements mandate that, via a credit report and background check, there can be no foreclosures or bankruptcies in the past two years and no felony convictions in the past three years. Beyond that, any resident experiencing a criminal arrest will be evicted, Coogle said.

But in late April, the Planning Commission unanimously voted to turn down the proposal.

In his memo to the City Council about the project Community Development Director Brian Wismer recommends approval of the project.

“The proposed conceptual plans will provide new housing and limited commercial space for the downtown.

New streetscapes along both Highway 85 and Lafayette Avenue will be provided as well as on-street parking along Lafayette Avenue. The concept plan may be deficient in total number of parking spaces, as the total square of commercial space has not yet been determined. Parking would need to be addressed via a second parking level or shared parking agreement with the adjacent retail center,” he wrote.