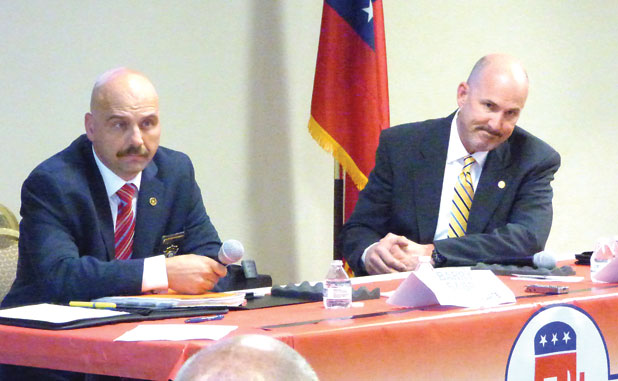 Takeaways from forum for Fayette sheriff

• Babb: As ‘tip of the spear,’ have been transparent, fiscally conservative, have fought ‘to take back our streets’

• Stevers: Tip of the spear vs. the hammer, step up fight against drugs

They responded to a number of questions by moderators Bob Ross and Angela Bean.

Sheriff Barry Babb was up first with opening comments.

“Four years ago I stood before a group just up the street and I made a pledge. That pledge was that I would be the ‘Tip of the Spear.’ I said I’d be transparent. I said I would fight to take back our streets. I said that I would be fiscally conservative,” Babb said. “Each one of those we did.”

Babb said 2015 ended as a better year with crime than any year going back to 2005 and response times were lowered.

“So tonight as we go forward, look at the CEO’s reputation, where I’ve been, how I got here, what’s happened. And just measure that tonight,” said Babb.

“I came back home four years ago because Fayetteville is home to me. Fayetteville means a lot to me. And when I see what’s going on out here, it bothers me,” Stevers said, adding that he takes crime personally. “I’m here tonight and running for the office of sheriff because I was approached in the summer asking if I had ever thought about it. I’ve got a different vision and that’s all it is. And I’ve got a different way of doing things. There is a tip of the spear and there’s also a hammer.”

Stevers said people bringing drugs into the county will have a hammer dropped on them.

The candidates were asked about the trend and status of drug-related crime in the county and what special efforts are needed to fight that type of crime.

“The trends that we see now, we’re seeing a lot of heroin. It’s starting to show it’s ugly face. Weed is very prominent. It doesn’t have the stigma that in once did in the country. We have (problems with some people obtaining) prescription medication. These are the trends,” said Babb.

Babb said his office has an eight-member narcotics unit, with one person assigned to the prescription medication “pill mill” and two working with the organized crime task force. They are very successful in finding drugs on a metro-wide basis, said Babb.

“Here in the county, it’s changed. When we lock people up they don’t snitch like they used to because it doesn’t have the stigma. So narcotics has changed for everybody. There are drug units that are now gone and drug units that have now morphed into different things,” Babb said. “We still have a drug unit. I think some people have a misunderstanding that the drug unit is down for service, that they’re not doing anything. They’re not (down). They’re doing organized crime suppression and things like that, which is why I feel like we ended the year very successfully.”

Stevers in responding to the question began, by saying he has experience with the narcotics business.

“Just the other day I got a phone call from a friend who has a teenage daughter. And she was talking about the heroin they’re starting to see on the teenage level. Heroin is probably the most dangerous thing we’re going to see right now in Fayette County. Marijuana is everywhere. It’s almost like it’s become the norm, sadly,” Stevers said. “I believe we not only need to have a task force, but we need to increase the task force and give them all the room they need. The confidential informant business may be down, but we’ve got to try because I don’t want these people thinking they’ve got free will to sell to our kids. We’re surrounded by it. It’s here. I’m going to put a task force together and we’re going to go after them.”

On another topic, the candidates were asked their opinion on legislation filed, though not passed, that would require Georgians to pass a firearms safety training course before they can qualify for a permit to carry a gun. Stevers and Babb were asked if they supported this kind of legislation.

“I think any time you can increase firearms safety with anybody who’s going to carry a gun I believe it’s a good thing,” said Stevers. “There are a lot of people who are experienced firearm owners who might not want to sit through the class, but if we look at the needs of the many and the needs of the few I think safety comes first. And especially with firearms.”

Babb in his response to the question said he has concerns with the legislation.

“First of all I don’t think it would pass,” Babb said. “Secondly, I think it’s a slippery slope. I think that if you start saying there’s requirements to exercise you 2nd Amendment right that you may be losing some ground. There was a lot of fear from some different camps (about) the ‘Guns Everywhere’ bill, that’s what they called it, when they extended the rights of weapons carriers, that there would be a lot of issues and problems. And I think that we’ve seen that that’s not the case.”

Another question dealt the extent to which no-knock warrants are requested and if the execution of those warrants led to the injury of innocent parties.

Babb led off, explaining the process of obtaining a no-knock warrant, noting that the officer requests the warrant and a judge signs off on it. It is signed if there is sufficient suspicion that the life of the officers or others would be in danger or the investigation would be hindered, he said.

“I can’t tell you the last time we had a no-knock search warrant. Because it is a dangerous situation,” said Babb, noting his previous participation on SWAT teams where such a warrant was executed. “The majority of them are going to be done in drug search warrants. But there’s different ways to do things. You have to look at the totality. You have to look at (a court ruling) looking at objective reasonableness. So I really can’t remember the last time we did that. We’re very cautious and we’re also very cautious with any type of incendiary devices like flash-bangs, as well.”

Stevers responded, saying no-knock search warrants are probably one of the most dangerous things that a narcotics or SWAT team can undertake.

“(No-knock warrants) are also a big responsibility,” Stevers said. “With the Fayetteville police I’m the one who writes the warrants to my cases. One thing we’re real clear about is getting as much intelligence as we can. Who’s there, do they have kids, who stays with them. We’re very specific around here because it’s such a huge responsibility, to protect the innocent people inside and the officers going through the door. Intelligence is everything when it comes to these warrants. I take it very seriously.”

The candidates were also asked individual questions. For Babb, he was asked what accomplishments he was most proud of.

Babb began saying he is proud of the hard work accomplished by men and women of the sheriff’s office. With that, he noted the positive impact of crime analysis.

“(Crime analysis) is a science. A friend told me that if you can’t measure it you can’t manage it,’ Babb said, referencing one of the crime maps used in the crime analysis program. “It’s a science. You use that. You can do predictions and forecasting. You use your heat maps (indicating crime frequency areas), you concentrate and that’s why we’ve gone down to 11 percent in crime just from the last four-year administration. Last year was an unbelievable year. It shocked us all that we were 23 percent better than we were in 2014. (Using crime analysis) you’re able to react to spikes and trends plus you can pick up on a pattern very quickly. It’s worked in New York City, in Los Angeles, and I personally watched in work in Atlanta. It does make a difference.”

Stevers in an individual question was asked the first thing he would change if elected.

“The first thing I’m going to change is to increase the task force. They are really not doing what they’re trained to be doing. I believe that narcotics is the root of all this. That’s where it starts,” said Stevers, adding that counties such as Fayette are targeted by drug dealers. “And I want to give these guys the tools and the lee-way when they’re right, and they will be right because they’re professionals, to go after these guys bringing drugs into the county because that’s where it’s all starting.”

Stevers said the sheriff’s office includes many good people, adding that he wants to add to their numbers if possible.

Responding to a follow-up question by moderator Bob Ross, Stevers was asked if he believed adding to the numbers of personnel dealing with drugs meant with available staff or additional staff.

“I think we can do it with available staff,” Stevers said.