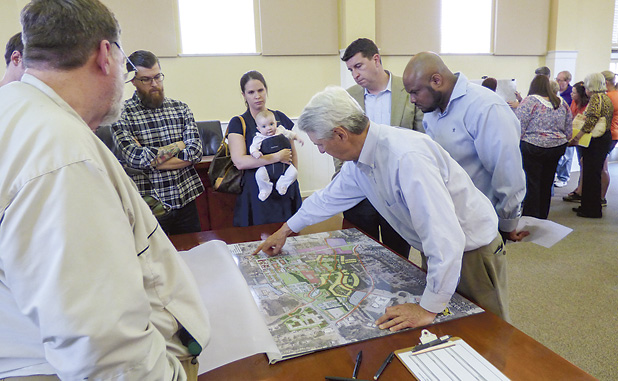 Described by architect Bill Foley as a fluid process, approximately 60 people attended the March 31 town hall meeting in Fayetteville where the newest version of the proposed downtown master plan map was introduced.

The city has held three other town hall meetings on the downtown master plan.

The March 31 meeting was informal, designed to have attendees interact with both city staff and architects on aspects of the proposal and was far from dry and uneventful. People gathered around the four stations outfitted with maps were engaged with presenters and the proposed plan.

Of the 60 people at the meeting, many spent up to 30 minutes at a station, reviewing potential plans and asking questions. The significant majority of those fit into the age group known as millennials — people ranging from their late teens through mid-30s.

The time spent at the previous town hall meetings led to modifications in the emerging downtown master plan, Foley said.

“This is a fluid process. The past comments generated by the groups have been compiled and went into the design of the plan,” Foley said. “We’ve already been incorporating those ideas.”

Also included in the plan are the Lafayette Square luxury apartments now under construction and the property immediately to the east and extending to Tiger Trail where office and retail space is a potential.

One emerging idea is to create a restaurant district in the downtown area. Another idea removed the townhouses and expanded the live/work art district. Another showed walking trails throughout the large area, with Foley saying the idea is to be able to walk from the northeast side of the downtown area (at Lanier Avenue and Hwy. 85) to the center point of Grady Avenue in approximately 10 minutes.

Other changes showed a larger park area and a dog park, two “pocket neighborhoods” that might accommodate one or two retail stores such as a coffee shop and the removal of nearly all the single-family homes fronting Grady Avenue in the initial phases of development.

Yet another addition to the current map showed an area on Grady Avenue, across from the former Fayette Middle School, as a potential site for the Joseph Sams School. City Community Development Director Brian Wismer said the Sams family noted in conversations that the school’s current location is out of capacity and a new location for the school could be needed in the future.

Wismer said preliminary conversations with the county resulted in both parties agreeing to explore such an option.

The proposed Abbington Square apartments at Hwy. 85 North and Lafayette Avenue are not included in the downtown map area. That rezoning request — which still has to win approval from both the planning and zoning board and the city council — has already drawn a lot of public comment, much of it negative.

Foley reiterated that, as has been the case from the beginning, the process is fluid and ideas for the area continue to emerge and modify during the past few months.

So what’s next for the process? Community input is expected to continue and, in approximately eight weeks, a marketing analysis designed to verify what is needed downtown will be complete.

The council will conduct public hearings on the plan, likely in June and July. The vote is expected to come in July.

Below, architects’ rendering of the latest revision of the proposed Fayetteville Downtown Master Plan. 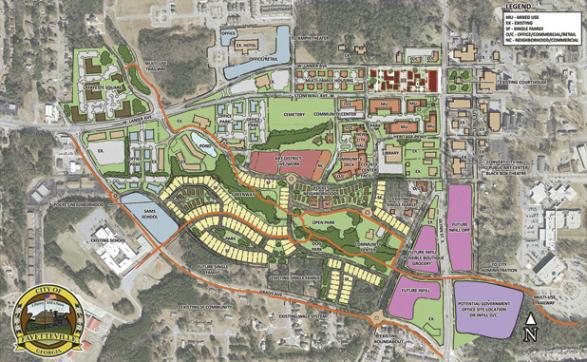