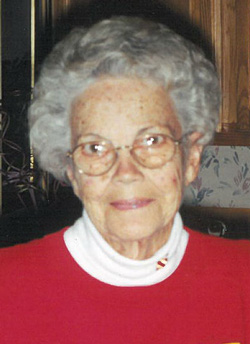 She was born in Fayetteville, Ga. on September 10, 1918 to Benjamin Wyatt Adams and Pearlie Ethyl Mae Chapman Adams and lived there all of her life.

She was preceded in death by her parents; her husband, James Clarence Rivers; her son, Charles Rivers; and her son-in-law, Sam Rakestraw.

Mrs. Rivers is survived by her sons, Ben and Dale Rivers of Knoxville, Tenn. and Tom and Judith Rivers of East Haddam, Conn.; her daughter, Shirley Rakestraw of Tyrone; her daughter-in-law, Barbara Rivers, Yatesville, Ga.; her nine grandchildren and fifteen great-grandchildren.

The funeral service was at 11 a.m. on Saturday, April 2, 2016 at the Chapel of Mowell Funeral Home, Fayetteville, with Dr. David Campbell officiating. Burial followed the service at Flat Creek Baptist Church Cemetery, Fayetteville. The family received friends from 6-8 p.m. on Friday evening, April 1, 2016 at the funeral home.

In lieu of flowers, the family requests that donations be made in her memory to Southwest Christian Care, 7225 Lester Road, Union City, Ga. 30291 or online at www.swchristiancare.org.