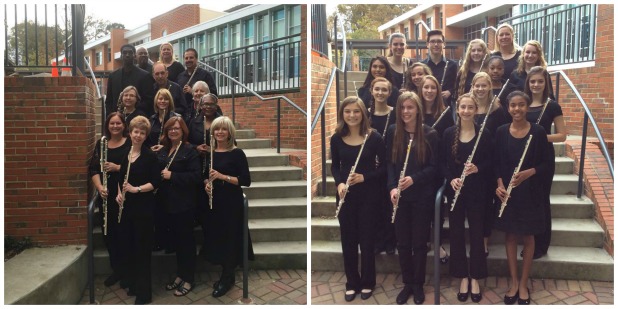 The Fayette Area Flutists and the Atlanta Southwind Youth Flute Choir performed their spring concert March 20 in the newly renovated West Side Recital Hall at LaGrange College. Both choirs performed a variety of fun and challenging music. The final piece, “Ring of Flutes,” was performed with both groups combined.

The Fayette Area Flutists is a group of adult amateur flutists and flute teachers mainly from Fayette County, but also from LaGrange, Lovejoy, Atlanta, and surrounding areas. Founded in 2013, the group meets mostly once a month to rehearse at St. Paul Lutheran Church and School in Peachtree City.

The performance yesterday was a landmark performance due to the premiere of the commissioned work for the FAF, “Dreams of Morpheus,” by Dr. Andrew Poor. This work was a two-movement work that challenged the group with various meter changes, tonalities and extended techniques. The FAF will perform this piece again June 25 at the Center for Visual and Performing arts in Coweta County.

Other performances by this group include performing at the annual flute choir extravaganza held in the fall by the Atlanta Flute Club, and Flutapalooza!

The FAF will perform May 1 for the Sunday morning service at the First Presbyterian Church in Peachtree City.

The Atlanta Southwind Youth Flute Choir is in its inaugural season as an ensemble comprised of middle and high school students in Fayette and Coweta counties. The performance in LaGrange marks the second performance for this young group.

The concert began with a new piece, “Railroaded” by Metro Atlanta resident Nicole Chamberlain. Her piece uses many extended techniques to mimic the sounds of a train. The group was also honored by Nicole’s attendance at the concert.

The ASYFC also plans to perform on June 25 at Flutapalooza!.

This group rehearses an average of three times a month at St. Paul Lutheran Church and school in Peachtree City.

Both groups are led by Kelly McKinney, a long time Fayette County resident and MHS Charger Band member and graduate of McIntosh High. In addition to the flute choirs, Kelly is the band director at Trinity Christian School in Sharpsburg, at St. Paul Lutheran School in Peachtree City, and Virtuoso Home School Music and Arts.  She is the flute professor at LaGrange College and Point University and maintains a very active flute studio.

Kelly, along with Gena Wayne, flutist and band director at Arnall Middle in Coweta County, organize Flutapalooza! A flute day geared for flutists of all ages and scheduled for June 25. This event will have guest artist Andra Bohnet as well as flute-themed classes, vendors from across the United States, master classes, flute choir performances, a flute choir reading session and more. More information can be found at www. Flutapalooza.com.

If you are a flutist, and are interested in joining one of these fun groups, contact Kelly McKinney at flutapalooza@gmail.com.